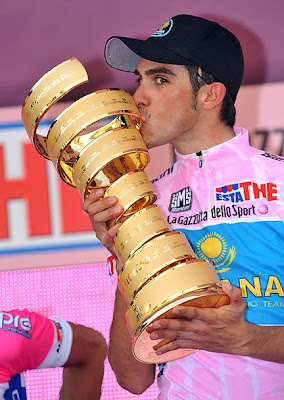 There was something very sweet and satisfying about Alberto Contador’s Giro d’Italia success last weekend, for how often do we see someone enter such a tough race at just a week’s notice, and actually go on to win? It’s probably never happened before - it is as unique as that. What was equally pleasing about the outcome was the way in which Contador and his Astana team paced themselves so carefully throughout the three weeks, leaving little doubt this was a team very short of adequate race-preparation and riding very much into the unknown on the most difficult days of the Giro. Faced off against some very strong and motivated Italian riders, Contador’s eventual victory was all the more enjoyable, for it bucked the recent trend of the Italian stage-race being the sole property of Italians. It has been fifteen years since a Spaniard – Miguel Indurain – last won the Giro, during which time only three foreigners have won the race. Contador now joins that elite group of winners, yet his achievement is tinged with the sad realisation that he only raced the Giro because he could not race the Tour de France this July.

Despite the complicated logistics of following this Giro, with endless transfers, mediocre weather, and colossal stages, the race organisers must be pretty happy with themselves for getting Astana into the Giro and livening up the racing – as well as showering the Giro with unprecedented interest from fans and media. There were a few stages when it was hard to know if Contador was actually going to win, such was the inconsistency in his and his team’s racing. He gained half-a-minute on stage seven, and proved his form was coming by riding such a superb time trial into Urbino three days later. He then seemed vulnerable on stages fourteen and fifteen, only to impress greatly in the Plan de Corones time trial, where he was probably the only overall favourite to have not tested the course pre-Giro. His worst day came at Presolana, where he almost lost the race-lead to an attacking Ricco and Di Luca. Yet Contador proved to be totally resilient the next day in the mountains, before trouncing his rivals on the race-ending time trial stage into Milan. His overall victory, by almost two minutes, was celebrated by moré than just Astana and the Spanish. For had Contador not won, those strange people in Paris would have won a small victory. As it is now, the Tour’s organisers are looking just a little bit silly – especially if Contador goes on to win the Vuelta, a race expected to be part-owned by the Tour before this summer is over.

When I saw Astana’s line-up for the Giro, I wasn’t at all sure Contador was their sole-leader, for the presence of Kloden and Leipheimer hinted at a team not sure itself of Contador’s form. As it turned out, the plan was entirely based around the Spaniard, with Kloden and Leipheimer doing the minimum to get the maximum for their man. Kloden dropped out with two days to go, and will lead the team in the Tour de Suisse, while Leipheimer rode as economically as is possible into 18th place overall, and will attack next week’s Dauphiné – Libéré with renewed vigour for his work. It was an eye-opener to see Leipheimer racing so tamely in the Giro, whether by choice or not, and I’ll be fascinated to see if the American national champion can turn himself around for the French stage-race that he’s come close to winning so many times. The course seems less brutal than before, with no Mont Ventoux to be scaled, and a flattish mid-race time-trial perfectly suited to Leipheimer’s abilities. The four mountain stages favour the climbers in the race, and a jaded Leipheimer will surely be challenged by the presence of men like Cadel Evans, Alejandro Valverde and Robert Gesink. The Dauphiné also sees such fresh faces as Michael Rogers, Carlos Sastre, and Sylvain Chavanel making a challenge – or at least training for the Tour. I for one will be hoping for clearer skies in France, and for the chance to grab the landscape shots that are missing from this year’s Giro collection.

Graham Watson
Posted by Recovox at 10:02 AM