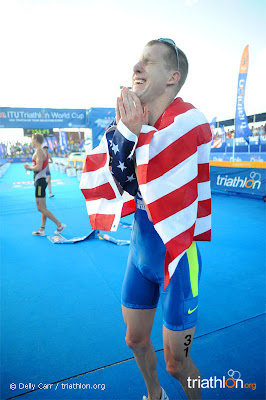 The final U.S. Olympic triathlon spot for Beijing in August was a battle between two-time Olympiam Hunter Kemper and 2004 Olympian Andy Potts. If either man was the top American across the line, he would get the final the spot for Beijing.

As in the women's race, a Speedo-sponsored $5,000 bonus went to the first athlete out of the water, and like the women's race, the prime went to a former NCAA All-American swimmer: Potts, who exited the Blue Heron Lake ahead of the field but had fellow Americans Kemper and Brian Fleischmann close behind.

The small group began the 40-kilometer bike course together but wasn't able to get away and was soon pulled back into the first chase group, forming a 21-man front pack. On the third of eight laps the chase group caught up to the leaders.

On the sixth lap, American Tim O'Donnell broke away and rode solo into T2 but was overtaken quickly in the run. A distinct lead group of five men emerged containing Henning, Whitfield, Docherty, Greg Bennett and 2002 world champion Ivan Rana of Spain -- a group that owns a staggering total of 28 world cup titles and seven Olympic appearances.

Nearing the midway mark of the run, Henning began to break away, leaving the other four to battle for the final spots on the podium. Henning was victorious in Des Moines again with a time of 1 hour, 54 minutes and 21 seconds - and he took home $200,000.

Docherty took silver and $40,000 for the second straight year, while Bennett settled for the bronze, his first world cup podium since 2003.

In the battle for Beijing, Kemper finished in sixth place, 30 seconds ahead of Potts, ensuring his third trip to the Olympics.
Posted by Recovox at 9:35 PM