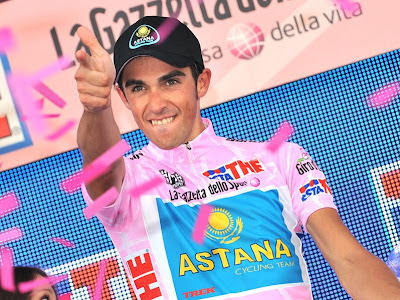 Spain's Alberto Contador, who is looking to win the Tour of Spain in September to add to victories in the Tour of Italy and Tour de France, said Monday that winning the world's three main cycling races would be better than winning an Olympic medal.

"I want to do well at the Tour of Spain even if that means that in order to prepare myself better for it I am not at 100 percent for the Games," he told reporters in Madrid.

"I have won the Tour de France and the Giro and if I achieved a triple it would be more historical than getting an Olympic medal," he added.

The 25-year-old won the 2007 Tour de France and earlier this month he became the first non-Italian to ride to victory in the Giro d'Italia since 1996.

Last week he said he would like to take part in the road race and time trial at the Beijing Olympics in China.

Contador will not be able to defend his Tour de France title this year because his Astana side were not invited by the race organizers due to a series of high profile drugs scandals involving team members before his arrival.

He said he will try to watch as much of the race as possible.

"I am not going to be jealous in any way because the year is very much on track and with the Olympics and the Tour of Spain it could be a historic year," he said.
Posted by Recovox at 10:07 AM