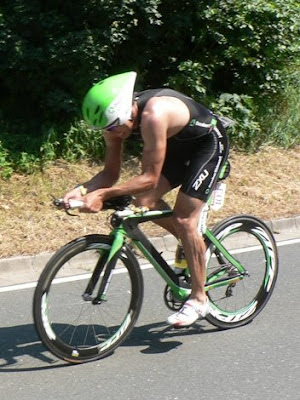 At the International German Championships over the middle distance in Kulmbach, Normann Stadler left his competitors far behind. In the end, the two-times Ironman winner had a lead of five minutes over his competitor Timo Bracht, who will also race in Frankfurt on July 6th. Last year’s winner Andreas Böcherer came in third.

“The Race turned out to be perfect for me and was an important performance gauge for Frankfurt. There was a first class field of competitors and I knew I had to give it my all. It pleases me all the more that it happened to be such a big margin.” says Stadler.

This years Frankfurt Ironman should be the first showdown of 2008 with Macca, Faris Al Sultan and Stadler all on the start list.
Posted by Recovox at 5:03 PM