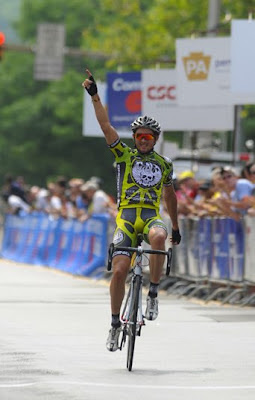 Rock Racing's Oscar Sevilla revived the spark which once earned him the best young rider's jersey in the Tour de France and a second overall at the Vuelta a Espana. The Spaniard attacked out of the field before the last 8.5 mile lap, powering away to form a breakaway with Bernardo Colex (Tecos), and the Team Type 1 duo of Moises Aldape and Valeriy Kobzarenko. But on the last trip to up Mt. Penn, Sevilla dropped his companions and powered his way to the victory over the final 2.5 miles downhill to the finish. While the other three were gobbled up by the peloton, led to the line by High Road's Edvald Boasson Hagen, Sevilla was able to hold off the charge of the sprint to take the team's biggest win to date. High Road's Bernhard Eisel, the defending champion, won the field sprint for third.