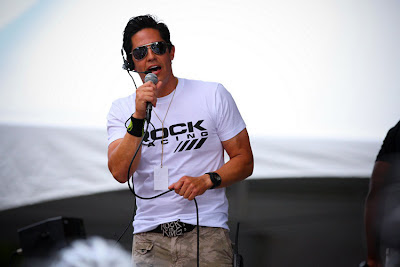 Michael Ball, owner of the Rock Racing team, says he and his companies will contribute "hundreds of thousands" of dollars to launch a fund to help elite racers who seriously injured while racing.

"Let's do the right thing for these guys," Ball said.

Ball urged other teams and bicycle industry members to contribute to the Professional Cycling Catastrophic Injury Fund, which will be managed by an independent board. The team will contribute 10 percent of the sales of Rock Racing merchandise to the fund. The entire proceeds from sales of several new items — to be sold on the team's Web site and at events — will go to the fund.

Ball said he was inspired to launch the fund by the plight of Mexican racer Fausto Esparza, who was partially paralyzed after a downhill crash at New Mexico's Tour of the Gila this spring.

"That's what really made me think about this," he said. "Here's a perfect example of a guy who has dedicated his life to the sport and now he's in a tough spot," he said.

Esparza, who spent several weeks at the hospital in El Paso, Texas, following the crash, has been moved to a facility in Mexico City, according to a source familiar with his situation. A call to a family member on Sunday was not immediately returned.

Ball said his goal is to raise $20 million over the next two years. The initial donation will come from the team, his Rock & Republic clothing company and himself personally. He said the fund will make donations to elite amateurs and professionals who are injured during a race. The fund's board of directors will decide on a case-by-case basis who qualifies and how much support should be given.
Posted by Recovox at 9:23 AM