It’s Not About the Bike 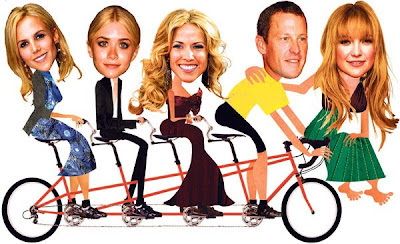 MOVING FAST Lance Armstrong, with Kate Hudson on the handlebars, and, from left, Tory Burch, Ashley Olsen and Sheryl Crow.

On Monday, Mr. Armstrong, 36, tan and fit, conversed studiously across the table from Charlie Rose about health care policy. The next day, he chatted on “The View” about a cancer summit in Ohio next month, and later that evening, he was ribbed by David Letterman about a luxurious photo spread of his Austin, Tex., home in Architectural Digest.

But there was also plenty of publicity unauthorized by Mr. Armstrong, including three days of coverage in The New York Post, a string of articles on Us Magazine’s Web site and an article in Life & Style entitled “How Lance Stole Kate From Owen,” all chronicling Mr. Armstrong’s relationship with the actress and tabloid darling Kate Hudson.

This is the second Lance, the one people.com called a “notorious Texas playboy.”

Friends confirmed reports that Mr. Armstrong and Ms. Hudson had kindled their relationship in the Bahamas in May, after she broke up with the actor Owen Wilson. Last week, the couple spent Father’s Day in Brooklyn, attended an Iron Maiden concert at Madison Square Garden and stopped in at her West Village town house. “Kate’s date,” The Post called Mr. Armstrong in a headline, reducing the seven-time Tour de France champion to the role of a star’s suitor.

Advocates of cancer research say Mr. Armstrong’s impact since retiring from cycling in 2005 has been nothing short of remarkable: 70 million yellow Livestrong bracelets have been sold to raise money for cancer causes. He has testified before Congress and has inspired legions with his own story of overcoming testicular cancer.

“I don’t have the bike anymore,” he says in a video on the Web site of the Lance Armstrong Foundation, which was founded in 1997 to empower people affected by cancer, a nonprofit related to the new, commercial livestrong.com. “This is the new fight. This is what I live for.”

But increasingly, it is not what he is becoming known for. Ask Larry Wallach what is the first thing that pops to mind when he hears Mr. Armstrong’s name, and Mr. Wallach, a salesman at Sid’s Bikes on West 19th Street in Manhattan, replies, “How he spent Father’s Day with his new girlfriend.”

Ask others in the shop, or read the comments on the Web under news items about Mr. Armstrong. Many people seem to mention his two-year relationship with the singer Sheryl Crow, his romance with the fashion designer Tory Burch and his canoodling last year in a New York nightclub with Ashley Olsen, rather than his serious pursuits.

“This guy has had more woman on his lap than a napkin,” wrote a typical commenter on ABC News’s Web site under a story entitled “Kate Hudson hops on the Tour de Lance.” “He is a serial dater and I’ve lost respect for him.”

Those glamorous high-profile women can be a lot of weight to carry around. Some experts in philanthropy say Mr. Armstrong risks detracting from his heroic image, and damaging his effectiveness as an anticancer advocate.

“He should be concerned about the impact of how he dates on the seriousness of his legacy,” said Claire L. Gaudiani, a professor of philanthropy and fund-raising at New York University, who has followed Mr. Armstrong’s work and his image. “He’s got a great role to play, but it doesn’t have to be in bars or on red carpets with lovely young people. That will ruin his capacity to do the work he has said is important to him.”

To quantify exactly how Mr. Armstrong’s personal life may or may not undermine his advocacy is not possible. Scott MacEachern, the general manager of the Livestrong line of workout gear Nike introduced in January, with profits going to the Lance Armstrong Foundation, said gossip coverage does Mr. Armstrong and society “a disservice.”

“It would be nice if the media would pay as much attention to him in the cancer wards of hospitals as it does to him in Cannes, France,” Mr. MacEachern said.

He hastened to point out that Nike remains supportive of Mr. Armstrong and said Mr. Armstrong’s personal life has not affected the popularity of Livestrong products, whose sales have already raised $2.5 million for the foundation.

Certainly, Mr. Armstrong has accomplished a rare feat, leveraging success in a sport few Americans once cared about into a post-athletic career in which his fame and influence are even stronger. This achievement brings Mr. Armstrong, still young and rich, plenty of opportunities to enjoy himself.

“He’s a lot more fun and interesting off the bike, and lot cuter,” said Sally Jenkins, the co-author of his memoir “It’s Not About the Bike: My Journey Back to Life.” “As a friend of his, that was the most grim, boring, monovisioned part of him,” she said. “The bike guy was this gaunt, driven fighter. Off the bike, he’s this flip-flop-wearing, beer-drinking, serial-dating marquee idol.”

Although Mr. Armstrong is divorced, he enjoys a good relationship with his ex-wife and is devoted to their three children, said his former coach, Chris Carmichael.

“His foundation, the fight against cancer and his kids: I see those as the most important three things in his life,” Mr. Carmichael said. “I mean he has girlfriends and things like that — why not?”

Ms. Crow, whom he started dating in 2003, was his first high-profile relationship. They separated in 2006, five months after becoming engaged. On an album released earlier this year, Ms. Crow has a song titled “Diamond Ring,” with the lyrics:

We made love all day

In our little hideaway

But I blew up our love nest

By making one little request

A spokeswoman for Ms. Crow said that the lyrics might or might not be about Mr. Armstrong.