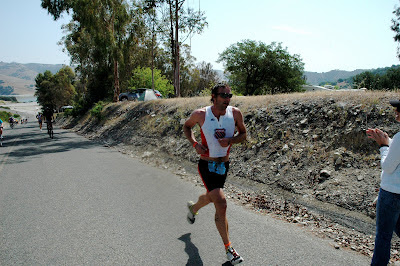 As May is coming to an end so is the first half of my triathlon season and with that in mind a short recap on how it went is in order.

One of my aims with this season was to try and get in shape a bit more slowly and stay healthy for a longer part of the year than the last couple of seasons to possibly become more consistent. Approaching the first race of the year in Oceanside I did a much better job of getting in shape slowly than I thought unfortunately. Consequently I was more undertrained than I’ve ever been doing a big race like that and in addition to being out of shape I also had very bad day. Though some people disapproves of dnf’s under almost any circumstances I realized that in order to start racing well at Wildflower 4 weeks later the best option here was to quit and thereby reduce post race recovery and being able to hit the hard training a bit earlier.

I spent most of that time training in Sweden in very cold weather, even for that time of year, but managed to raise my fitness quickly. The race in Wildflower was extremely competitive and had possibly one of the strongest field in a long distance race outside Hawaii this year. For me the race was a step in the right direction and I led the race for a long time but lost a lot of places in the end and finished 7th. It was only 5min between 1st and 7th though so it was a very tight race.

Next race up was Austria 70.3 a couple of weeks later. This race had assembled a field with mostly strong Europeans like last years winner and Ironman Frankfurt runner up Michael Göhner and Laguna Phuket triathlon champion Massimo Cigana. I had improved my condition a bit since Wildflower and did a bit better overall I felt like. The bike course was fun and diverse with some fast parts like the 25km on the freeway where I averaged almost 49kph and some hilly parts like the 8km climb where I struggled to get over 20kph. Unfortunately the run wasn’t as much fun as the bike for me since Massimo caught me for the win in the last km and I had Michael chasing me down the rest of the way. I held on for 2nd though in yet another tight race with only 70s separating 1st and 3rd after 4h of racing.

I was supposed to race Switzerland 70.3 the following weekend as well but unfortunately I developed a small overuse injury and had to cancel my participation there. Instead I have a couple of days down time before focusing on the rest of the season. but more on that at another time.

Bjorn
Posted by Recovox at 8:11 AM