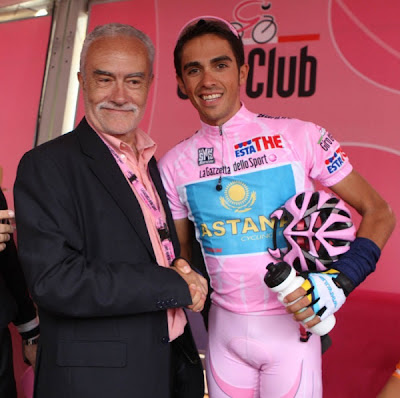 Vuelta organizer Victor Cordero says this year's Vuelta could be one of the best in history.

Alberto Contador received a hero’s welcome upon his return to Spain on Monday, with politicians toasting him and thousands of fans cheering him upon his arrival in Madrid’s Barajas airport.

But before the recently crowned Giro d’Italia winner had a chance to celebrate his unlikely victory, there’s already growing speculation the 2007 Tour de France champ can complete cycling’s “grand tour triple crown” with a run at the Vuelta a España this fall.

“I’ve had a great season, I’ve been able to win two different major tours and now I am going to race in the Vuelta a España,” Contador said. “Now I am going to try to win the Vuelta, which gives me an extra motivation because it’s my ‘home’ race and everyone will be watching me.”

Only four riders have won all three of cycling’s major three-week tours and Contador could become the rider to achieve all three victories within the shortest amount of time, if he can pull off a win during September’s Spanish tour.

Jacques Anquetil was the first to complete cycling’s grand tour sweep, with five Tours, two Giros and one Vuelta between 1957-1964.

Felice Gimondi became the second, winning one Tour, three Giros and one Vuelta from 1965-1976.

Eddy Merckx, who holds the record with the most grand tour victories at 11, won five Tours, five Giros and one Vuelta from 1969-1974.

Bernard Hinault currently holds the record for claiming all three within the shortest time frame, winning the first of five Tours in 1978, his first of two Vueltas in 1978 and one of three Giros in 1980, within a period of 26 months.

If Contador can win the Vuelta to go along with his 2007 Tour victory and this year’s Giro, he’d complete the treble in just 14 months.

Contador could also match another record if he pulls the Giro-Vuelta double, a feat that’s only been matched by Merckx (1973) and Giovanni Battaglin (1981).

For Contador, the Vuelta becomes the next major goal, with perhaps a detour through the Summer Olympic Games in August.

“I feel less anger about missing the Tour after winning the Giro. If the Tour hadn’t left us out, I would have raced neither the Giro nor the Vuelta,” he said. “I’m more motivated about the ‘triple crown’ than the Olympic Games right now. We’ll have to make a decision about the Olympics sooner than later. You can’t always win, but I am going to do everything to win the Vuelta.”

Vuelta director Victor Cordero was at the Giro last week to confirm Contador’s presence at the Spanish race in what could be the season’s major showdown among some of the sport’s biggest names.

“The spectacle is assured because not only is there a great level of participation, there’s a beautiful course,” said Cordero, citing stage finishes at Angliru, Plá de Beret, Fuentes de Invierno and La Rabbassa.
Posted by Recovox at 7:20 AM