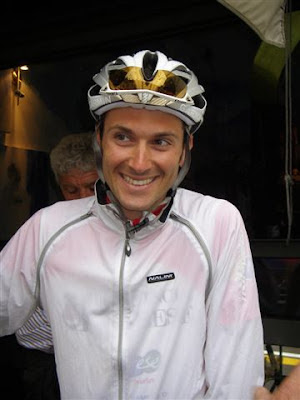 While the 2008 Giro d'Italia completed its course from Palermo to Milano, Ivan Basso – banned for through 24 October for his involvement in Operación Puerto – completed his own race. The 30 year-old Italian, winner of the 2006 Giro d'Italia, simulated the Italian three-week race through various training rides, including 5000 metres of climbing on the day of the Passo del Mortirolo.

"I did quite possibly the hardest training in my life the day of the Mortirolo. I have never before climbed Cuvignone five times. I did 240 kilometres solo, with 5000 metres of climbing and I spent more energy than riding Liège-Bastogne-Liège," recalled Basso to La Gazzetta dello Sport. He was dropped from his team and banned from cycling last spring, on the eve of the 2007 Giro d'Italia, for his relations with Eufemiano Fuentes.

Instead of watching this year's Giro d'Italia on television Basso worked out specific routes to prepare himself for his re-entry with Team Liquigas (his first race will likely be the Japan Cup, October 26).

"We started with a flat stage the first day. Then a mixed stage, a mountain stage of about 200 kilometres, a 30-kilometre time trial, another mixed stage and a final tappone of 240 kilometres," Basso continued. During his five repeats of Cuvignone, a climb near his home of Varese, he set his personal best time of 29'15" – a few seconds faster than what he set going into the 2006 Tour de France. His desire to be in form when he returns was not put off by the inclement weather; his time trial test was run under heavy rain, the same day that the Giro d'Italia raced the stage to Varese.

Over the past weeks he has heard from his future team-mates. "[Franco] Pellizotti and [Vincenzo] Nibali I talk to on the telephone. [Andrea] Noè, [Charles] Wegelius and [Ivan] Santaromita train with me. I don't know [Roman] Kreuziger, but I have heard great things about him. They seem happy for my arrival and the experience I can bring along."

When Basso does return for his first full season back in 2009 he will find his rivals further developed. "[Alberto] Contador is first class – at the first Discovery Channel training camp, with a cold, he was able to wow everyone on the climbs. [Riccardo] Riccò has showed himself to be very strong at this year's Giro. And [Damiano] Cunego, you will see, will have a great Tour [de France]."
Posted by Recovox at 10:35 AM