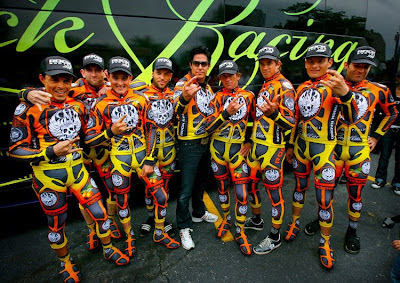 Rock Racing is going “all-in” for one of the most prestigious weeks of professional bicycle racing in the United States. The team is now an official sponsor of the Commerce Bank Triple Crown of Cycling. Building on its “Here to Stay” motto, Rock Racing Team Owner Michael Ball said it is a perfect fit for the team to strongly support such a popular, prestigious and long-running event that is often referred to as “Philly Week.” “We wanted to be a part of Philly Week in a big way,” Ball said. “That meant more than just bringing the best team to compete in it.” As part of the team’s sponsorship, Rock Racing will present a one-hour highlights show on the Versus Network on the weekend of June 21-22 featuring aerial views of the action from the “Rock Racing Cam.” In addition to fielding a talent-laden roster that includes Fred Rodriguez (USA), Tyler Hamilton (USA), Oscar Sevilla (ESP), Victor Hugo Peña (COL), Sergio Hernandez (USA), Doug Ollerenshaw (USA), Jeremiah Wiscovich (USA), and Michael Creed (USA), Rock Racing will “own” the world-famous Manayunk Wall during the Philadelphia International Championship on Sunday, June 8. For the 156-mile (251 km) race, the signature event of the series, the steep, leg-breaking 17 percent grade that is traditionally the site of the most lively house parties and raucous fans, will be branded as “The Rock Racing Wall.” “The Wall is one of the greatest fan traditions in all of pro cycling,” Ball said. “It made perfect sense for Rock Racing to salute all the great house parties and celebrations that have taken place on this part of the course over the past 23 years.”
Posted by Recovox at 8:50 AM