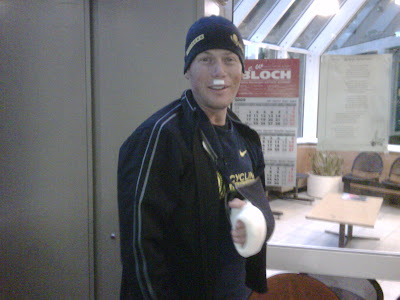 American Chris Horner has once again been plagued by the bad luck which has haunted him all season. The Astana rider was one of dozens of riders involved in a crash in the final kilometres of the Vuelta a Espana's stage four on Tuesday, and his team confirmed that he has an "undisplaced fracture of the wrist".

Horner will not continue the race as the risk of the break becoming worse over the next two weeks is too great, his team said.

It is the third serious injury of the 37-year-old rider's 2009 season. In April, he broke his collarbone and ribs in a crash at the Vuelta a Pais Vasco after his teammate Daniel Navarro broke his chain and fell in his path.

He recovered in time to contest the Giro d'Italia, where he was highly placed in the overall when he fell victim to another crash on stage 11. He was diagnosed later with a fractured tibia.

Horner again recovered from his injury, but not in time to be selected for Astana's Tour de France squad. He sat out much of July, returning to competition at the Tour of Elk Grove before heading back to Europe where he nearly won the Tour de l'Ain.
Posted by Recovox at 11:39 AM