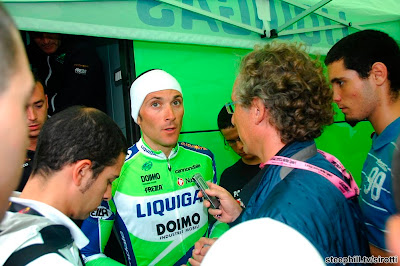 Ivan Basso (Liquigas) faces two demanding mountain stages today and tomorrow at the Vuelta a España. He lost time on his rivals in yesterday's Valencia time trial and needs to recover the difference to keep within reach of the leader's gold jersey.

"There is no need to become hysterical, I felt well and experience has taught me patience is needed in a Grand Tour," said Basso. "From here to Madrid I will find enough climbs where I can make a difference, there is time to win the gold jersey."

Heavy rains marked the first major time trial of the 2009 Vuelta yesterday. Basso eased his way around the course to avoid crashes. He lost 56 seconds to Samuel Sánchez, 41 seconds to Cadel Evans, 38 seconds to Alejandro Valverde and 31 seconds to Alexander Vinokourov.

"It's clear the rain caused some difficulties for me," said Basso. "But, looking at the classification, the distances are restrained."

"The next two stages, where we will face demanding climbs, will be used to recover a little of the ground I lost."

Basso will also consider that every stage finish offers bonus seconds of 20, 12 and 8 to the top three finishers.

It is Basso's first time to race the Vuelta a España. He finished fifth in this year's Giro d'Italia and won the 2006 edition. He placed second in the 2005 Tour de France.
Posted by Recovox at 10:55 AM