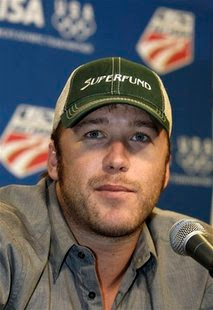 Bode Miller is ending his splendid isolation and rejoining the U.S. Ski Team, just five months before the Vancouver Olympics.
After skiing on his own the last two years, then spending the spring and summer out of touch with the sport, Miller has decided he wants to be part of the team and take another run at the Olympics.

He reached out to U.S. men's alpine coach Sasha Rearick a few weeks ago and received a warm reception, which surprised him.

"He seemed really enthusiastic about the opportunity to sort of try to reintegrate me into the team, and for the first time I felt really positive and excited about the whole thing," Miller said Thursday. "At that point, it was sort of a no-brainer."

The three-time Olympian left the U.S. team after the 2006 Turin Olympics, where he made more headlines for his late-night partying than his skiing.

Asked what was different now, Miller said both he and the team had evolved.

"They've been pushing the limits of what they can provide. Things have changed," Miller said. "They're in a great place right now."

Miller, however, is the unquestionable star of the team.

"He brings a really good intensity to the team and training with him, he pushes everybody," Nyman said in a phone interview. "That's super important. It's rare to find guys that push that hard all the time. ... I think it's a good thing that he's back."
Miller has indicated he will continue traveling the World Cup circuit in his motorhome rather than staying with the team in hotels. Rearick said any athlete can travel that way as long as it's not a distraction to the team.

Miller, who turns 32 next month, plans to begin training with the national team immediately. He didn't set a date to return to competition but isn't expected to compete in the season opener on Oct. 25 in Soelden, Austria. He hopes to race in a World Cup meet in Beaver Creek, Colo., beginning Dec. 2.

Rearick said Miller, like all the skiers, must qualify for a spot on the Olympic team based on this season's results. The Olympic team will be announced Jan. 26.

In May, Miller told Head, his ski manufacturer, that he planned to ski but would not commit to the Vancouver Olympics.
He announced his decision Thursday at a news conference at Staples Center. Wearing an untucked gray dress shirt, jeans, stubble on his face, and a baseball cap low on his head, the New Hampshire-based skier was in Southern California visiting his young daughter, who lives in the San Diego area.

Miller, who won his second overall World Cup title in 2007-08, cut last season short when he failed to win a medal at the world championships in February. It was the third straight major championship where Miller failed to make the podium. He won two silver medals at the 2002 Salt Lake City Games but finished without a medal in Turin, settling instead for lots of tabloid headlines.

"I don't think you can undo anything," Miller said.

If he has any regrets about his behavior in Turin, he's keeping them to himself.

"Right now, I don't feel like this is an arena for me to apologize about stuff," he said. "My actions are going to speak much more loudly than any apology can. That's one thing that's unfortunate about apologies, that way they come off like you're trying to smooth things out. Your actions definitely carry a lot more weight. From here forward, I feel like I'm moving in a very positive direction. I hope that's what I'm judged by."
Posted by Recovox at 11:32 AM