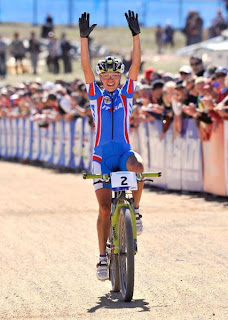 Russia's Irina Kalentieva overcame early mechanical problems that left her languishing in 21st place to win her second world title in three years. Kalentieva caught early leader Lene Byberg of Norway on the last lap of the six lap race, and broke away to win. Byberg finished 13 seconds behind for the silver medal, with American Willow Koerber taking bronze at 52 seconds.

"Today was unbelievable," said Kalentieva. "I had a good start. I was in the front on the climbing, and then on the downhill something happened with the chain - I don't know what - so I had to stop and repair the chain. It was about one minute, or one and a half minutes, I am not sure. Anyway, I gave everything today, because I wanted to be World Champion again here. It was my dream, and it came true, and I am very satisfied and very, very happy."

Although conditions were clear and sunny, a stiff breeze was blowing up the long false flat that led into the first climb of the lap. This meant a conservative start for the race, with a group of six riders completing the first lap together - Byberg, Cécile Rode Ravanel (France), Eva Lechner (Italy), Catharine Pendrel (Canada), Sabine Spitz (Germany) and Koerber. Kalentieva was a few places back, after suffering problems with chain suck that she had to stop and deal with.

Spitz led the initial move up the climb on lap two, but Byberg overtook her and began to distance herself from the rest. Through the rest of the lap and lap three Byberg continued to lead and open a gap on Koerber, Spitz and Ravanel. Pendrel was struggling to hold onto fifth, and at the end of the lap Kalentieva had moved up to join her.

The Russian rider had solved her technical problems, and moved up impressively through he r rivals, pulling back 30 seconds to start the last lap in third behind Byberg and Koerber. She caught Koerber on the first technical climb and went straight past, to join Byberg with a half a lap to go. Byberg tried an attack, but Kalentieva caught back easily, and then launched her own attack into the final singletrack, to pull away for her second world title. Byberg rolled in 13 seconds later, visibly disappointed.

"It was a very technical course,” said Kalentieva. “In Europe we also have technical courses but here with the big stones and so on it seems more technical here than in Europe but it was perfect for me. I think [the mechanical issue with the chain] gave me more concentration and it gave me more power, because I knew it should not happen today to my chain.

“I was at the front in the beginning of the race and I felt good,” she added. “I did a good job: I made less mistakes on the uphill and downhill, and I felt good and perfect and that is why on every lap I wa s able to move forward. It was a very special course with more singletrack and you cannot follow when you go uphill, and I lost time, many times, but anyway I am the World Champion now, and it happened!"

Byberg, who won her first World Cup this season, and leads the overall standings, was in a little bit of shock after having the title snatched away from her.

"I kind of had the title in my hands and I lost it in the last half lap. But I just went for it today from the start and just took it from there. It was really hard to ride alone on the flat sections after the feeding zone, and this took a lot of energy. But I just decided to go for it, and maybe one day I can make up the thirteen seconds [to Irina]. I am happy, this is my first International medal and so far I have had a great season, but I am a little bit disappointed also."

"Normally in races I do the opposite: I get into the top 10 and then come from behind like Irina did today. But today I just knew it was a great start for me - not straight into a steep uphill, but flat so you can sit there behind in the wind and stay on a wheel. That was my goal for the season: to try to have a good World Championships. It is also a mental thing: the one chance on the one day at the World Championships. "

As with Byberg, this is Koeber's first world championships medal, and she had no disappointment with finishing third. The American rode a 29er, as did her team mate Heather Irmiger (10th).

"At the start I was like, 'whats going on? None of us can ride our bikes!'. Everyone seemed to be crashing into each other and falling over,” said Koeber. “But you just have to stay patient, as it is five laps, and I managed to escape any big crash or problem with my bike, so I had a great day out there. Just a lot of fun, and the crowds were great. This is my first [International] medal, so I am very excited and pleased.

"I guess you could say the start worked in my favour because it ended up well, it all worked out great,” added Koeber. “I just stayed calm, because in the past I have panicked numerous times and you just waste a bunch of energy, so I was like, okay, whatever is happening in front of me, it will all work out, and I guess it did. I won the last race in the US Cup in New York three weeks ago, so that gave me a lot of confidence, and then I really didn't train too much. I just did a bunch of short fun things, so I would be rested and really ready to race today."