Horner back for Lombardia, looking for a win 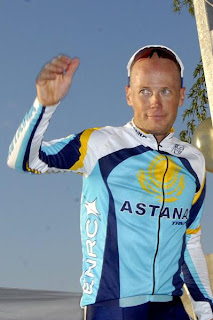 American Chris Horner has been knocked out of racing with broken bones and faced frustrating recoveries four times this season. On each occasion he has returned to form and into the mix, knocking at the door of a strong result before the next crash sent him back to the sofa to heal a fracture.

He'll get his last chance to salvage his season in October when he again returns to racing in Europe.

"This year I've been a dark horse for almost any race I've been in, but I can't get through the races healthy," Horner said. "There are four more races left, so that's why I want to go back and do them.

"I feel like this year I've made a great leap in terms of where my fitness is and going up against all the big hitters. I don't need to go back because I need a contract. It's purely because I want to go back and get one win in."

A crash in the Tour of California didn't stop the Astana (soon to be RadioShack - his contract is nearly final) rider from finishing the race, but the fractured knee kept him out of Paris-Nice. A return in the Tour of the Basque Country lasted four stages until another crash left him with a fractured collarbone.

Coming back in the Giro d'Italia, Horner was eighth on the general classification after several tough mountain stages when a crash sent him packing with a fractured leg. The injury left him without the coveted Tour de France spot, but determined to shine in a Grand Tour, Horner returned to the Vuelta a Espana only to have another fall.

"Forty guys went down in the rain and it was spectacular. I don't think it was anybody's fault. The roads were slippery and dangerous, and the race should have been neutralised long before the crash. The officials should have neutralised the race on GC at least - it was that dangerous. Guys were crashing all day."

One slick roundabout later, Horner was back in the USA with two fractures in his left hand and another surprise; a fractured pelvis.

"Nobody caught the pelvis until a few weeks later when I was back in the States, I had it x-rayed because the leg was still sore, and they said, 'no wonder your leg is sore, you have a broken pelvis!'

"All of them are just fractures [not displaced] so they'll heal up on their own. I just can't be aggressive with them. Stay off the bike for a little while. Once the pain stops, you know you can start riding again."

"So that's all I've been doing lately is trying heal up and get back for the last week of racing in Lombardia," explained Horner.

"I think Lombardia is my best shot - it's hard enough, and I will have some racing and then another week of recovery to find some form before it. The big 'if' is whether I can make it over there with the fracture healed in time. I've been training on the road for a few days this week, and I still have three weeks before the start of the first race, then a week to Lombardia after that."

Horner brushed aside the constant string of setbacks as if recovering from broken bones was an everyday occurance - which it very nearly has been - with a steely determination and a good sense of humour.

"It hasn't been that difficult. Every time I've come back to form pretty fast. One week riding easy and two weeks riding hard, and the form comes along. It's worked out alright, but the problem is just staying upright so it doesn't happen!"

Next year, Horner hopes to be able to get in a full season of "big boy races": Paris-Nice, Pais Vasco, Amstel Gold, La Fleche Wallone, Liege-Bastogne-Liege, the Giro d'Italia or Tour of California, the Tour de France, Tour of Spain and fall Classics.

It's a heavy schedule for a younger rider, much less that of one who will be one of the oldest racers in the pro peloton. Yet Horner isn't ready to stop even after next season and fully intends to go on for another two years at least when he'll hit 40 years of age.

"My next contract will lead me up to that, so yeah! I'll absolutely keep going. As long as I'm still going fast, I'm not going to plan on stopping; nine to five work ain't better than what I'm doing, so why would I quit?"
Posted by Recovox at 8:51 AM