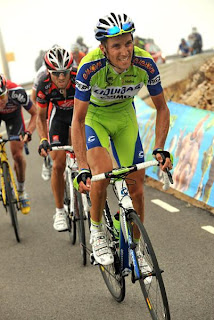 "Three hellish stages are waiting for us. The race becomes hard, like I like it," said Basso. "Long climbs, the right type terrain, days where the differences come via resistance."

"Every day holds surprises and you have to be smart to benefit from them," said Basso. "I have always insist on patience because a Grand Tour is only won on the last day, before then anything can happen."

It is Basso's first time to race the Vuelta a España. He finished fifth in this year's Giro d'Italia and won the 2006 edition. He placed second in the 2005 Tour de France.
Posted by Recovox at 9:19 AM