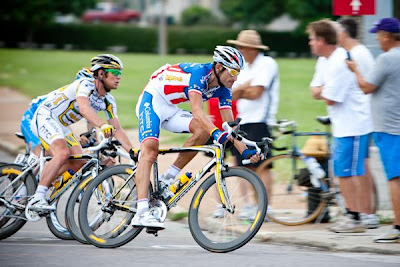 Sprinter Mark Cavendish is savoring his final days with mentor and friend George Hincapie before parting ways in Kansas City on Sunday. The Tour of Missouri marks USPro Champion Hincapie’s final hurrah with the Columbia-HTC team before moving to BMC Racing Team for season 2010.

Cavendish won Missouri’s opening stage in convincing fashion, benefiting from the help of his near-unrivaled Columbia-HTC lead-out. The young talent spent the better part of the circuit race glued to Hincapie’s wheel, a place he is comfortable and assured of his inevitable success in a sprint finale. For Cavendish and fans alike, it is difficult to imagine a race without the guidance of the famed veteran he has come to know as Big George.

“To be perfectly honest I get pretty emotional talking about it,” said Cavendish, who admitted he is not quite ready to say goodbye. “Even when George was talking about it at the press conference yesterday I was [emotional].”

A quick look into Cavendish’s achievements this year starts with a milestone win at the Milan-Sanremo. He went on to don the maglia rosa in the Giro d’Italia after a team effort to smash the opening team time trial, then win two additional stages. But he made history in July when he won a sixth stage of the Tour de France on the Champs-Elysees. His win today marked a 22nd season victory and he attributes much of that success to the care of Hincapie during the races.

“George has been an instrumental part of my success and my career and I’m really sad to not race with him anymore,” Cavendish said. “He’s been like a big brother to me. We’ve went on so well together in the last years. He’s such a big, big part of the team. He’s like the grand daddy of the team. He looks after everyone, he looks after me.”

Hincapie confirmed in the pre-race press conference that the Tour of Missouri would be his last race with Columbia-HTC. With the exception of a possible appearance at the UCI Road World Championships with the US national team, he won’t race until next season once he has settled in with his new BMC Racing Team.

“We’ll still be racing together just not on the same team,” Cavendish said. “We will always be really, really good friends. This is a nice way to finish off the season.”

Cavendish began his career with German squad T-Mobile in 2007 and it was there that he first met his childhood hero, Hincapie. “In cycling, George is an absolute gentleman,” Cavendish said. “The first time I spoke to him was at the Tour de France in 2007. I was the fat little neo-pro and I had my Dad with me and George came up to me and started to talk. He said that he was looking forward to the season and to riding with me. It was that day that I knew he was a special, special guy. I was proud to call him my teammate and I’m even more proud to call him my friend.

“When I was growing up in my teenage years, George was riding with US Postal and to finally be able to ride with a guy you’ve grown up to respect is a big, big thing but to be able to call him a friend is something a young rider would dream of," he added. "I’m really, really lucky to be able to do that.”
Posted by Recovox at 9:31 AM