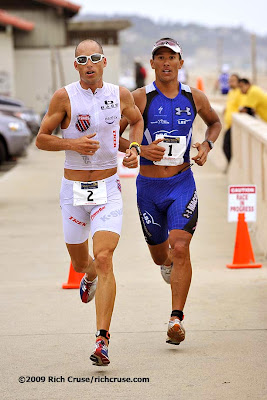 Chris Lieto has been working on his run. He showed great form by taking out Macca in Malibu triathlon and coming in a close second to ITU speedster Greg Bennett. Chris has been spending some time with some of the best runners in the sport.

Flotrack's David Williams recently caught up with Ryan Hall who is a member of the Mammoth Track Club. The MTC was founded in 2001, and some of its members include Deena Kastor, Meb Keflezighi, Anna Willard, Sara Hall, and Scotty Bauhs. Ryan is joined in this workout by Josh Cox and world class triathlete Chris Lieto.

Click on the title link to watch the workout video.
Posted by Recovox at 10:54 AM