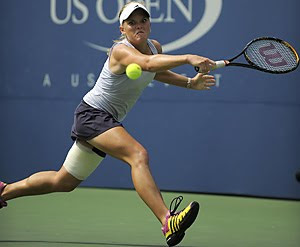 Forget about forehands and backhands. Melanie Oudin's biggest weapon is her heart.

The 17-year-old sparkplug from Georgia proved it again Monday at the U.S. Open, extending her remarkable run to the quarterfinals with another come-from-behind victory, 1-6, 7-6 (2), 6-3 over 13th-seeded Nadia Petrova.

Oudin staved off four points that would have put her behind 5-3 in the second set, then rolled through the third, hitting corners with those underrated groundstrokes and taking advantage of 22 unforced errors by her more-seasoned, higher-ranked opponent.

Rankings, like her age, however, are nothing but numbers.

The 70th-ranked player already had wins over No. 4 Elena Dementieva and No. 29 Maria Sharapova at Flushing Meadows, along with one over former No. 1 Jelena Jankovic at Wimbledon. Now, she's knocked off No. 13.

This time, however, she wasn't the one crying tears of disbelief. It was her twin sister, Katherine, sobbing in the stands.
"I'm so happy to be in my first quarterfinal Grand Slam everrrr," Oudin said in her postmatch on-court interview.

Talk about heart. Oudin improved to 6-1 at Wimbledon and the U.S. Open this year when she's lost the first set. She is 17-4 overall this year in three-set matches. "I started serving better, thought I could do it and -- I did," she said.
Posted by Recovox at 12:57 PM