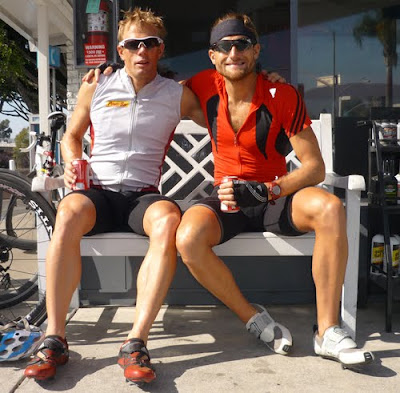 “Aus is und gar is und schee is, dass wahr is!“ That is a Bavarian saying and it means that it is over now which is nice. The last training camp of this season is over and the tapering phase has started. Our trip to Santa Barbara was a successful one especially from the training perspective. Even if Swen payed tribute because he just did Ironman Kentucky and he could not train as hard as he would have liked to. Therefore, and because of the “We have to eat” slogan he gained a few pounds. That was quite good for his swim performance but not that beneficial for his running. The guy just builds up muscle mass so fast.

As at every other unknown place we had to explore a lot of things in the first days. But the group bike rides, where also bike pros took part, as well as the wonderful Los Banos Pool (50m) and the nice Santa Barbara based triathletes made our training life easier. Aaron Olson a former T-Mobile rider showed us at on ride that he cannot just push harder than the ordinary triathlete, but that also his bike handling was better. At 48 km/h and 350 watt he showed us all holes on the road, which are quite common in the states.

Andrea still followed and follows her own program. Two weeks of tapering for her just means refusing work. Neither could Swen and I follow her early morning swimming procedure. Every day she got up at 7 am and went to the pool. But her training was really good especially the running, which she focused on.

Werner showed us again that you do not need to sleep or eat for a good training. He followed me closely at the mountain rides and he drove me at my last serious running workout first in a bonk and after I had recovered from that in a muscular and digestive capitulation. At this place I would like to say thank you to the 40 year old who retired from his athletic life.

My health problems, which made this season the worst ever, are indeed not gone yet, but they are much better. 4 minutes on the kilometer at the run is no trouble for me any more. Riding up mountains does not give me instant pain and I am able to swim hundreds with a starting time of 80 seconds. 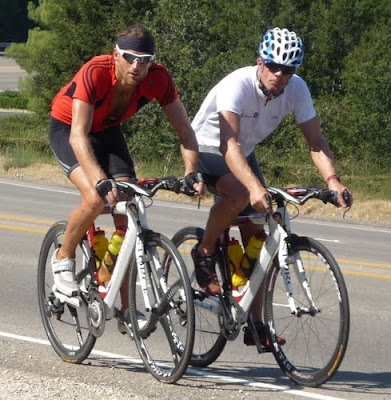