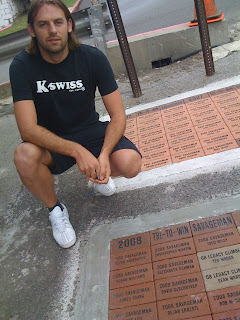 Despite the presence of a solid pro field, Sweden’s Bjorn Andersson and American Olympian Susan Williams successfully defended their 2007 titles in Maryland.

The third annual Savageman Long Course Triathlon took place Sunday on a sunny, warm day, absent the threat of rain that forecasters had called for.

Andersson was the first athlete out of Deep Creek Lake, Just over a minute back the second athlete—Williams was out of the water in about 24 minutes. ITU pro Margie Shapiro, making her first half Ironman-distance debut, came out of the lake over a minute off Williams.

“I was surprised to come out second, but spend about five minutes in transition area putting arm warmers on,” Williams said.

Out of the water in 32 minutes was Lyne Bessette. Also making her half Ironman debut (after having done a few sprint races), Bessette, a former Canadian Olympic cyclist as well as a Canadian national road, cyclo-cross and time trial national champ, was cutting through the field on the bike.

“I have friends who told me about this race and I said ‘sure, why not?’ I had to break the ice eventually!” Bessette said. “Plus I had stopped racing full-time and needed to give myself a personal challenge. I want to do Hawaii next year, so I’m looking at doing 70.3 Oceanside for some practice, and Lake Placid to qualify.”

Williams was aware of her acumen, and was certainly concerned. “I know she’s an Olympic cyclist and would not have been surprised if she had gone by me on the bike,” Williams said.

It didn’t matter. Williams simply tore away from the rest of the women on the bike—Bessette included, Bessette did ride into second place late while Shapiro and Canadian Tara Norton battled in close proximity over the bike course, arguably one of the toughest at the distance with over 5,800 ft of climbing, including several climbs requiring special gearing. For Williams, however, while she felt like it was tough, she was simply outclassing her competitors.

“The wall seemed harder than last year, but I feel like I went better this year,” she said.

Once at T2, she had a 10-minute lead on Bessette, and a 12-minute lead on Shapiro headed onto the undulating two-lap course, punctuated by a nearly half-mile fireroad ascent. “I think doing a good group workout really helped. It’s a strength run for sure,” Williams.

Williams cruised safely in to take her second straight victory at Deep Creek Lake. The fleet-footed Shapiro caught Bessette by mile three of the half marathon and slowly extended on Bessette. “I think I’m suited to this distance, but still have 2012 as my focus for the most part,” she said. “I’ll probably bookend my ITU season with longer races, though.”

Bessette summed up her experience; “Running here and running in ‘cross, it’s different!” Bessette said with a laugh. “I found it really, really hard. But third place for my first long one, I’m happy.”

Norton, making a successful comeback from the crash at last year’s Hawaii Ironman that took her from fourth place to the hospital with broken bones in her hand, foot, and vertebrae (as well as a torn hamstring suffered in training in February) finished fourth. “I decided to go out without any pressure and enjoy the day.”

The men’s race was the Bjorn Andersson show, as he led from the first stroke in cool Deep Creek Lake through to the finish. But it wasn’t a walk in the park. “I suffered a lot,” Andersson said. “ I was stung on the tongue by a hornet and got a bit of a fever last night, so I didn’t feel too good all day.’

Still, it was enough to come in with the win by nearly two minutes over Josh Beck of Carlisle, PA. Ottawa’s Rick Hellard took third, while TeamTBB’s Zach Ruble took up fourth.