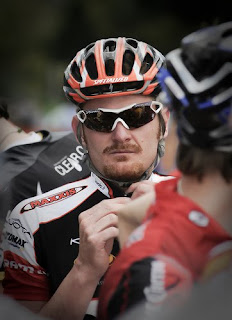 It seems only a short time ago that Floyd Landis was making his return to professional cycling at the 2009 Tour of California with the American-based UCI Continental team OUCH p/b Maxxis after completing a two-year suspension for a doping violation. Now, Landis is mid-way through one of his last races of the season at the Tour of Missouri, and he gave Cyclingnews a brief insight on where this year has taken him.

When asked if he was happy with his return to the peloton this year, Landis plainly said, "No. There is really not much else to say."

Landis was pegged as one of the race favorites at the Tour of California in February alongside other Grand Tour contenders like Levi Leipheimer and Lance Armstrong (Astana), Michael Rogers (Columbia-HTC) and Dave Zabriskie (Garmin-Slipstream). However, the combination of an untimely illness coupled with a lack of race legs meant that the competition proved to be a step above his capabilities.

Sifting through the results of race after race this year hardly reveals overwhelming success for the returning rider. However, according to Landis, this season has brought more than just mediocrity. "I have a new appreciation for racing in the US," said Landis, who primarily raced in Europe while competing for US Postal and Phonak. "It is great to race so close to home."

The Tour of Missouri's roads have taken the peloton through towns like Pocahontas, population 127, and the state's largest metro area, St. Louis, with a population of nearly three million, another reason Landis wants to continue racing. "Cycling allows you to see the world and meet lots of people," he said. "This year I have been to parts of the US that I had never been to before, and I have met a lot of great people everywhere I have gone."

This is his first time competing in the Tour of Missouri, now in its third edition. While he has lost many fans due to his doping violation, there are still those who come out to watch him race. Similar to the Tour of California crowds, his fans continue to wait outside his team bus for an autograph and flock to the starts and finishes to see him back in action.

"It's great to have that support and the race has been really good," he said. "It's always nice to have fans. I have never done this race before but I had heard a lot of good things and I'm finally glad to be here."

So race he does, no matter what people think of his 2006 downfall within cycling. Landis went into the 2006 season in top condition riding for the Phonak team. He won the inaugural Tour of California and went on to win Paris-Nice, Tour of Georgia and the Tour de France. Stripped of his Tour victory after a urine test came back positive for abnormal testosterone values, Phonak let him go and Landis served a two-year suspension.

After a turbulent two years, Landis still maintains his innocence and is focused on enjoying is days back in the bunch and competing in a sport that has given him a career for nearly a decade. Despite not reaching his initial racing goals set at the beginning of this season, Landis is pleased with the results of a femoral head resurfacing through OUCH Sport Medicine in 2006.

The unconventional hip replacement was needed after a case of bone death that resulted from excessive scar tissue blocking blood flow to the hip joint. "I was really focused on my hip and getting back to racing," Landis said, who was responsible for bringing on OUCH as the title sponsor of the former Health Net team. "My BHR hip feels as good as new. I've got close to 25,000 miles on the new hip. I have no reason to believe that it will limit me in any way."

The big question that is on everyone's mind remains, "Is Landis going to win bike races again?" Only
time will tell. For now, he is plugging away as a domestique at the Tour of Missouri to give his
teammates a crack at success.

"We have a couple of guys who can sprint well in John Murphy and Andrew Pinfold so we have been working for them," he said. "It's been a difficult race. There are no big mountains but so far it has never been flat. I'm looking forward to seeing how Rory Sutherland does in the time trial.

"I think probably one day there will be a breakaway in the Tour of Missouri but who knows when that will happen? I've been working for the guys, but I think I'll take my chances on a breakaway this race. You never know."

Landis had not yet confirmed what his plans are for next year. However, news of Lance Armstrong's newly formed RadioShack team has spearheaded the rumors of the old US Postal team revival. One such rumor has Landis as a possible transfer. Although Landis did not comment on this rumor, he did note his appreciation for his domestic team OUCH p/b Maxxis.

"I see this team taking a big step forward next year," said Landis about where he sees himself in 2010. "I am very happy to be a part of this program."
Posted by Recovox at 11:13 AM