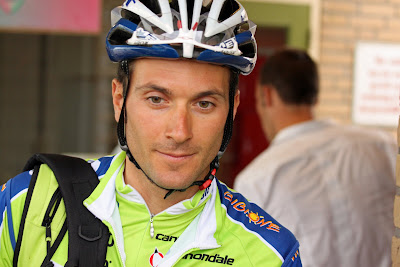 Liquigas captain Ivan Basso showed flashes of his old form on stage thirteen to Sierra Nevada, placing fifth on the stage and showing that he is maintaining his strength as the race progresses. While other general classification contenders such as Samuel Sanchez (Euskaltel Euskadi) are showing the strain of a fortnight of hard racing, the Italian is still in the hunt for overall victory. That said, he needs to make up one minute and two seconds to move into the maillot oro.

"Today I found the right terrain and race situation to attack and change the situation in the ranking," he said after the 2,380-metre summit finish. "The team did a great job helping me during all the stage. In particular I appreciate (Roman) Kreuziger because his role in the race strategy was really valuable."

Basso's goal on Sunday will be to eliminate his deficit to Valverde and, if at all possible, put in a decent buffer before next Saturday's 27.8-kilometre time trial. The duo recorded precisely the same time on stage one, placing eighth and ninth, with Valverde prevailing in the longer Valencia time trial.

He placed 13th in the flat 30-kilometre test there, losing 1:05 to Fabian Cancellara (Saxo Bank). Basso was 1:43 back in 36th place, and knows that a strong ride on Sunday is essential if he is to be in the running for the final victory.

"Tomorrow we've another difficult stage and, after this three days of moutains, all the riders have to pay attention," he said. "We spent a lot of energy on this climbs. For my part, I want to perform as I did today all the way untill Madrid. Only there we'll know the final outcome."
Posted by Recovox at 8:38 PM