Nydam Eager For Tour of California 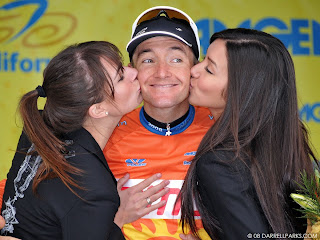 Having had what could be termed a break-out year in 2008, Scott Nydam of the BMC Racing Team is eager to kick off the 2009 season with a bang. In last year's Tour of California, Nydam had his greatest success when he and his teammates defended the King of the Mountains jersey.

"That whole race was a special experience that will stay with me for the rest of my life-I will savor it forever," Nydam said. "My father had just been diagnosed as being gravely ill, I had just crashed out of the Tour of Qatar and was feeling a little defeated."

With the 2009 edition of the Tour of California just weeks away, Nydam has been using the past months to recharge his battery. "The weather in Northern California has been great for the most part, and some of the roads in Santa Rosa are simply the best you could imagine - epic rides start just outside your doorstep," Nydam said. "I was telling my boss Gavin Chilcott about a recent ride through Skaggs Springs and I think my statement was, 'I need to win some races so I can keep training!' In Northern California, it is possible to ride outside 99% of the time. You just need to be prepared with the right clothing and equipment."

"Like last year, I think that it is important that we hit the ground running," continued Nydam. "This year we have a bigger and better roster of riders and we should expect to build on everything that happened last year so that means going to many of the same races as we did in 2008, but this time with a lot more confidence and higher expectations. I crashed out of the Tour of Utah which kept me out of our final races of the year. That meant I wasn't able to be around to celebrate some of our biggest accomplishments with the team like Jeff's win at the Tour of Utah and his 5th at US Pro. So for me, the 2008 season ended a little anti-climatically. But things like that are sometimes good because it keeps you hungry."
Posted by Recovox at 3:33 PM