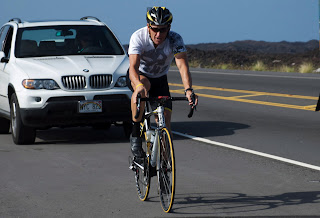 Lance Armstrong has been on the big Island of Hawaii getting ready for the Tour Down Under. Many people want to know if he is going to tackle the Hawaiian Ironman at some point.

Part of an interview from the "Daily Beast"

Is it possible you could you race beyond 2009?

I don’t want to limit it. It would be a little irrational to announce or even think about it now, because I haven’t even started to racing this year yet. But it’s entered my mind. I’m having fun right now and feeling strong and healthy. I certainly don’t want to limit it to one year. But it could be one, it could be two. But later on even after the cycling comeback, I’d like to conquer some other endurance goals that I’ve had for a long time.

What do you mean by that?

You know, other sports I’ve dabbled in 15 years ago. Perhaps go back and get wet at the beginning, and then a blow dry in the middle and then run. You know what I’m saying? These days they say triathlons are a shampoo, a blow dry and then a 10K.

At least he is getting plenty of warm weather training on the Ironman course. His coach Chris Carmichael has arrived on the Island today, and now the real work begins for he 2009 season.
Posted by Recovox at 6:40 PM