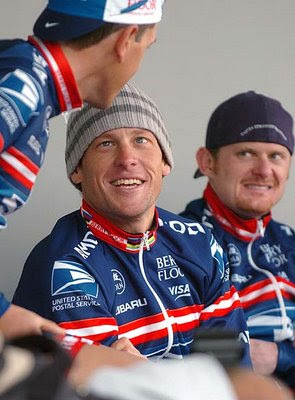 The 2009 season is looking like it will be a flashback to the earlier part of the decade, and Lance Armstrong is happy to see his compatriot Floyd Landis joining him in making a return to the peloton. Landis' two-year suspension for doping ends next Friday, freeing him to join his new team, OUCH Pro Cycling, on the roads at the Tour of California next month.

But Landis' comeback is hardly the same as the fairy-tale return of the seven-time Tour champion. Landis left the sport in disgrace as the Tour winner who had his title stripped when he tested positive for synthetic testosterone, and while he faced a long and expensive defence of his good name, Landis failed on every appeal to the anti-doping authorities.

Armstrong appealed to fans to respect that Landis has been punished for his offense and should be allowed to ride. "People serve their time, just like anybody else. Once their time is up, they get to go back to work," Armstrong said Thursday.

"Sometimes I get frustrated with people who criticize his return, and then what, they're going to sign up and cheer when David Millar returns? It's the same thing. You've served your suspension, let's get back on the bike and race," he said, using the EPO-confession of the British star as evidence of the fans' hypocrisy.

"There's no point in criticising Basso, criticising Landis, or criticising anyone… if you've paid your penalty, this is normally how society works. Let's forgive and forget and get on down the road.

"Obviously Floyd's a friend of mine, he's a former teammate and he has a lot of fans. In that sense, you've got to remember that Floyd might have been found guilty but at the end of the trial if you polled the people, 50 percent thought he was innocent – in regard to that it's good that he's back."
Posted by Recovox at 3:27 PM