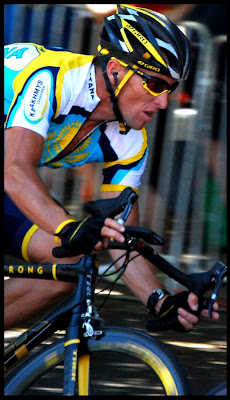 But with two laps remaining, Armstrong had a dig on the climb of Montefiore Hill, where he attacked the peloton, bridged to the lead group of six riders, and set his sights on coming away with a stage win. It wasn’t to be however, his companions having been out since the opening lap when a group of 13 escaped, their efforts taking their toll late in the race.

Nonetheless, it provided another positive sign that the 37-year-old Texan is slowly but surely coming back to where he needs to be, finishing 29th overall behind 2009 Tour Down Under champion Allan Davis of Quick Step.

“I felt pretty good today. [I] gave it a little go in the last laps, but I needed to be with some more guys; I think they [the other riders in the break] were cooked from being out there. You needed four, five guys really turning [to stay away],” said Armstrong.

“It helps when you have good legs. I actually felt the best today out of the entire week,” he said – yet another indication that Armstrong’s done the preparation to allow his gifted physique to recover day after day.

Summing up the Tour Down Under, Armstrong was full of praise for the largest cycling event in the Southern Hemisphere: “Especially for the guys that focus on the Spring Classics, this race is almost a must.

So, has this week been a confidence-booster for the seven-time Tour winner?

“I wouldn’t say it’s given me too much confidence. It’s given me a reassurance that I can still race at the highest level,” Armstrong enthused, though he’s yet to test himself in a time trial or long hill climb situation – two areas that will require training and finessing over the coming weeks, before his next appointment at the Tour of California.

“There’s long, extended efforts [in the Tour of California] – the TT in California will be 30-plus minutes, so that’s a real effort as well as the prologue which is a short effort, which is something I haven’t done in a long time, so… we’ll just have to wait and see.

“I think it’s healthier for me mentally to go in there as a domestique and not put too much pressure on myself, and work for Levi,” Armstrong said.
Posted by Recovox at 8:38 PM