Basso In Argentina While Lance Is Down Under 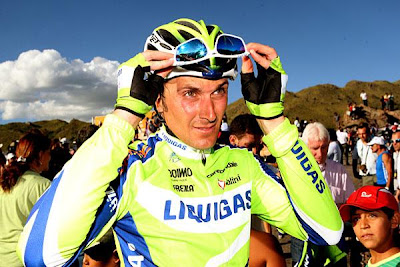 As the world awaits the return of Lance Armstrong at the upcoming Tour Down Under in Australia, Italian Ivan Basso is preparing for his own 2009 comeback in Argentina at the fourth annual Tour de San Luis held January 19-25. It's no wonder the world-class rival GC contenders, who will go head to head for the first time since 2005 at the Tour of California in February, have chosen to visit the Southern Hemisphere for the early season races.

Both countries are prime proving grounds because of the warm summer climate, but Argentina boasts bigger and higher mountains than those in Adelaide.

In it's second year with UCI status, the Tour de San Luis has upped its ranking to 2.1, and as a result has drawn 22 teams from around the world, thanks in part to race co-ordinator Giovanni Lombardi. Of the 22 teams, three are ProTour including Liquigas led by Basso, Saxo Bank led by American Jason McCartney and Fuji Servetto led by Spaniard David de la Fuente.

There are also three professional continental teams, six continental teams and ten national amateur teams. The event has grown in length and stature with the addition of two stages and three hill top finishes, changes that cater to a climber compared to last year's sprint-heavy finishes.

On paper Basso may be considered the strongest GC contender present, a 2004 and 2005 Tour de France podium finisher and winner of the 2006 Giro d' Italia, he returns to the sport after the completion of a two-year suspension for his admitted involvement with Dr. Eufemiano Fuentes, the man at the center of the Operación Puerto scanda, in 2007. He and his team-mate Vincenzo Nibali will lead Liquigas against a peloton hungry for an early season victory.

Click on title link for race coverage.
Posted by Recovox at 11:03 AM