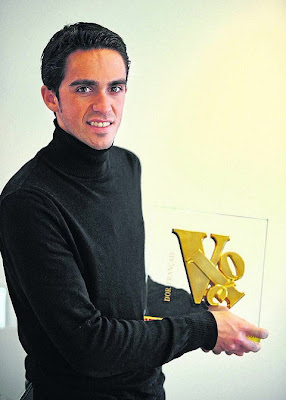 Alberto Contador was in Paris yesterday, at the invitation of l’Equipe, with his brother and PR man Francisco, and his director sportif Alain Gallopin.

The winner of the Tour de France 2007, and the Giro and Vuelta 2008 was at the editorial meeting of the paper and received his second Velo d’Or prize from Velo magazine.

“I’ve already had the pleasure of riding past the front of your newspaper (headquarters) wearing yellow, and now I have the chance to see it from close up,” smiled the Madrid native, 26.

He talks about what the Tour brought him, and his hopes for the 2009 edition. He also discusses his new teammate, a certain Lance Armstrong, with whom he will likely not race till the departure at Monaco on July 4th.

Click on the title link to read the interview.
Posted by Recovox at 8:43 PM