Lance Armstrong Is Back! 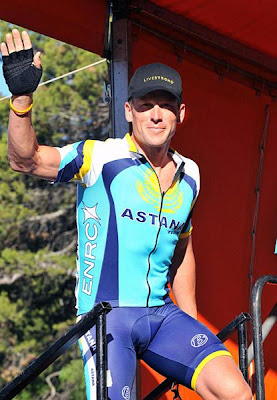 Astana's Lance Armstrong has enjoyed his return to professional racing, four months after announcing his return, after three and a half years on the sideline. The much-hyped event came at Tour Down Under's Cancer Council Classic, a criterium race on Sunday evening.

Armstrong had a good sniff at the front of the peloton early in the race. The American soon retreated well back into the peloton, before eventually finishing the Cancer Council Classic in 64th spot.

"I found it a little safer and a little easier in the back. In the first 50-60, there was a little bit of positioning," he said. "At that tempo, it would take a while [to rediscover my race legs] - the race stages, I would say it will slow down significantly, with more hills and using more power."

The seven-time Tour de France winner spent the entire race flanked by his Astana teammates. Whether at the head of the pack, or floating towards the rear - where he spent much of the race - Armstrong always had at least two Astana riders by his side.

"I was a little nervous in the corners. Honestly, the weirdest thing was the sun - the sun was going down here (points to a corner) you had the sun really in your eyes," he said. "But after that, it was fine."

The rider's preparation for the event has started to pay dividends. Armstrong spent some time in Hawaii adjusting to a warmer climate and training prior to arriving in Australia last week.

"It's a dry heat, so it's not so miserable, but on a hard effort for one hour at hot temperatures, it's good for a first day," he added.

Armstrong said the classic isn't his style of racing, but he still enjoyed it. He wouldn't predict how he might feel after the race's next leg, the first stage of Tour Down Under's ProTour event.