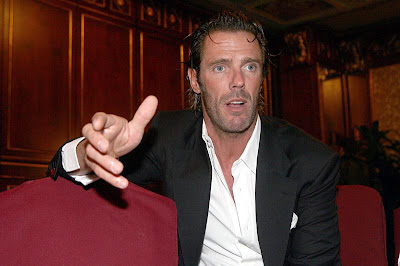 Just as the 2009 cycling season kicks off in the southern hemisphere, Mario Cipollini shared his vision with La Gazetta dello Sport's Claudio Ghisalberti. 41 year old Mario Cipollini told Ghisalberti "I think the 2009 season will be incredible. Last year, the doping earthquake brought everything down, kind of to 'ground zero'. Now we have to rebuild cycling. Commenting on the two major comebacks of Armstrong and Basso, Cipollini said "Armstrong is already really strong. Lance never fools around; he has a special internal motivation that helps him succeed. Basso is one of the few riders who had paid for his sins and has already comeback well on a difficult road. He wants to show that he is the number one rider and Ivan has a big social responsibility and Basso has the mental fortitude to succeed.

Regarding the possible comeback of his fellow Tuscan Michele Bartoli, Cipollini explained "If Michele decides to comeback it's because he feels good and can do well. I made the same choice to make a comeback. I understand his motivation and to comeback is a little like a rebirth. And the competitive level is not that good these days." La Gazetta then queried Cipo, asking "so if a 37 year old Armstrong comes back after three seasons off and wins, that shows that there is not a lot of quality in the peloton?" Cipo replied "It might be the case, but I think Contador and Andy Schleck are both great riders so we are covered for the future with them. As for sprinters, Cavendish it the most explosive, but inside the race, that is not the only thing that counts. To win Sanremo, for exmple, one needs other talents like endurance, tactics, climbing ability...Bennati, when he comes to the sprint fresh, is the more complete rider which guaranteed more results. But Cavendish is still young and hasn't raced that much on the road." What about the debut of track sprinter Theo Bos on the road with Rabobank, who has the track world record over 200 meters (9"772). Does he have any chance?, asked La Gazzetta. Cipo said "Bos, who is coming from the track is a real big bet. Cycling needs these kinds of challenges and it will be interesting to see where it goes, how well Bos can do".

La Gazzetta asked Cipo about Lampre duo Ballan and Cunego, and the long, lean Tuscan didn't spare his words, saying "Ballan has to understand quickly if he's taken the step forward and had the strong mentality to support the responsibility of wearing the World Champion's jersey. And I hope that Cunego has made the right choice to concentrate on the classics instead of the grand tours. I think that his win in the 2004 Giro d’Italia was an isolated incident. does not have a huge motor but he knows how to move in the group like a predator. If I were him, I would focus on the classics." As for Cunego's long-time rival Filippo Pozzato , Cipollini said "Everyone says that he is a champion that should explode but will he? But I think he's chosen the right team." As for Cipollini's new job as technical consultant for the Isd team, Mario told La Gazzetta "There are a lot of good young riders on the team. The Isd project revolves around (Giovanni) Visconti. He has excellent tactical sense and the mentality of a winner. He reminds me of Paolo Bettini. And there is also (Oscar) Gatto, who I would like to teach something to because I think he can find his place among the sprinters."
Posted by Recovox at 11:07 AM