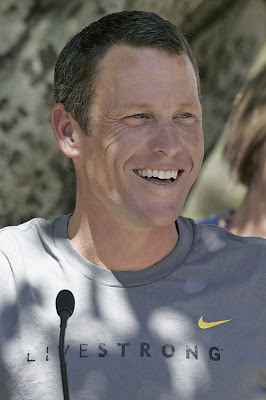 Seven-time Tour de France champion Lance Armstrong said Monday it would be unrealistic to expect him to win his first race in three years in next week's Tour Down Under.

The American cycling great declared he was in the best shape of his life at the start of a season as he prepared to return to professional racing at the age of 37.

Armstrong's appearance in the Adelaide tour has generated huge international interest, enough for organisers to take extra security measures to protect him during the event.

The first evidence of that was when he was escorted to a press conference here Monday by police.

Armstrong said he was excited and looked forward to racing again.

"I think it would be unrealistic to expect a victory," he said. "The race has gotten harder and harder over the years.

"I hope to be in the mix, I could be completely wrong. I might be the first guy dropped."

Armstrong said he was as serious as ever about the competition.

"I've prepared much harder this series of months than I ever would have in the past," he said.

"The tests that we do on the bike, or on the road, or in the lab indicate that my January fitness is much better than it ever was the years when I was winning the Tour (de France).

"But that doesn't mean anything until you get into the race."

Armstrong said his decision to return to competitive cycling was influenced by his campaigning efforts for cancer awareness.

"I came back as a volunteer and so I'm here for the love of the bike and the passion of the cause."

Armstrong has dedicated the Tour Down Under not only to his comeback but his anti-cancer fight through the Lance Armstrong Foundation, which was formed in 1997, one year after Armstrong was diagnosed with testicular cancer.

He successfully battled the cancer in 1996, retired from riding in 2005, but has dedicated his comeback to his "Livestrong" cancer prevention campaign.

Armstrong will race with his Astana teammates for the first time on Sunday in the Down Under Classic criterium warm-up in Adelaide, and said he wanted to use the tour to re-adapt to racing after coming out of retirement.

"I just don't want to get clobbered too bad. That is my main motivation for training hard," he said.

"I don't have any illusions of grandeur. I hope I get in the race and get re-acclimatised to the tempo and the speed and what it is like to be around 200 guys in a fast-moving group, and we will see."

Armstrong's arrival in Australia ended days of speculation as to his travel plans, which organisers had tried to keep secret. 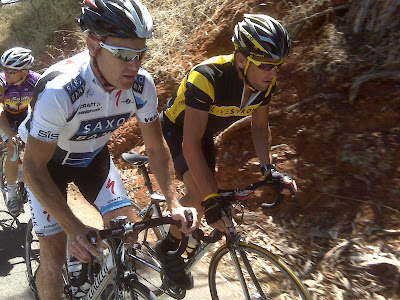 Lance Training yesterday for next weeks Tour Down Under.
Posted by Recovox at 9:52 AM