Hincapie On Lance's Return To Racing 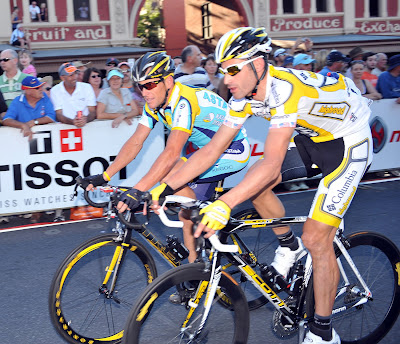 For all of Lance Armstrong’s seven glorious Tour de France victories, one man and one man only rode beside him on every stretch of road – George Hincapie.

Besides confidant and team manager Johan Bruyneel, the 35-year-old resident of Greenville, South Carolina was very likely one of the first people Armstrong called when he announced his return to racing. Thing is though, for the very first time, they’re riding on different teams – Lance on Astana, George for Columbia-High Road.

Being the great friends they are, they warmed up together before Sunday night’s evening criterium, the Cancer Council Classic, which acted as a prelude to the six-stage Tour Down Under that commences Tuesday.

Still, it must have felt just a touch odd.

“You know, it’s really part of any sport; you have to be able to move on and go to other teams,” reflected Hincapie, “and relationships don’t really get affected from that. That’s just part of our jobs, and we have to accept that and move on and do our jobs.

“Yeah, it’s a little odd, but we’ve been friends for 20 years now and that’s not going to change. The most important thing is that we have a lot of history together, and being on different teams won’t affect that at all,” he said.

Lance in Astana colors – now that will take some getting used to?

Hincapie said not once during the hour-long criterium in Adelaide’s eastern parklands did he see Armstrong in the bunch, so if anything, the lack of conspicuousness will surely do wonders if the Texan decides to stretch his legs over the coming days.

The fact Hincapie and Lance are separated by no more than 22 months probably has a bearing on their rock-solid friendship, and like his former leader, he feels too much fuss is been made about riders in their “upper 30s”, as Armstrong phrased it the other day.

Challenged Hincapie, “I put myself up to any young riders any day. And I wouldn’t trade my position now to be a young rider, either.

“I feel strong as ever and this is my sixteenth year pro; it’s just a matter of how motivated you are. Age has nothing to do with it,” he said, believing he has at least two prime years left before even contemplating retirement.

For now, it’s a matter of keeping in good shape till the Spring Classics, before another appointment with the race that has consumed him for the best part of a decade: Paris-Roubaix.

“I think about the race all the time, and I’m sure it’s [to win] still possible. It’s a race that I was born to race – it’s in my blood, and I think I’m one of the strongest riders for that race. [I] need a little luck and hopefully it will happen this year,” he said, hoping his dream will evolve to reality sooner rather than later.
Posted by Recovox at 6:57 PM