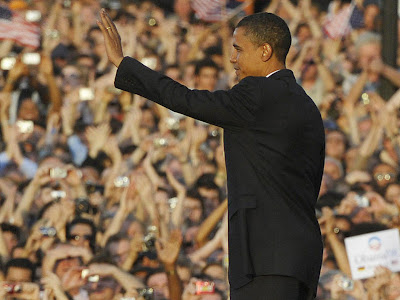 Ryan Bowen was just an ordinary man who, like millions of other people, commuted to work on his bike from his home in Los Angeles, California.

But Barack Obama's historic election as President of the USA inspired him to trek across the country on two wheels to attend the inauguration ceremony, which will be held on Tuesday 19 January 2009.

Bowen, 22, arrived at his destination at midday on Sunday after pedalling over 3,000 miles (4,800 kilometers) over the past six weeks from Los Angeles to Washington DC.

Before he set off on the epic journey on 2 December 2008, photographer and massage therapist Bowen had never travelled more than 20 miles in a day, but he managed to average 85 miles a day on his trip, with a peak of 151 miles per day when travelling through Florida. "I was inspired by the Obama campaign's message of change," Bowen told AFP.

But the journey was not as easy one, with more than 40 flat tires, many nights spent camping out in a tent and even being hit by a Jeep. The sheer physical challenge of riding such distances for the first time was also a big shock to his system. "Early on, my knees felt like they were going to explode," he remarked.

Adopted into a white family in Portland, Oregon, Bowen comes from a mixed-race background with African-American, Native American and white roots and feels a strong connection to the first African-American president, who famously celebrated securing the Democratic presidential nomination by going on a bike ride.

"When you see somebody with his ideals, as well as the racial thing, it gives me hope that we can do better things in this country," said Bowen. "For the first time, I feel like it wouldn't be a shame for me to be patriotic, to be proud of my country and take ownership of my country."

But Bowen was not alone during his “crazy idea that worked”. Filmmaker Albert Velazquez documented portions of the journey and Bowen was joined by fellow cyclist Joshua Atteberry in Austin, Texas. In all, 20 other riders joined Bowen on different legs of the tour and he received support and encouragement wherever he was.

“At the times when things were their darkest, in Arizona and West Texas, there'd be just random positive things that would happen," Bowen said. "Either it would be the gorgeous countryside that I would pass that would just uplift my spirit, or somebody sending me a text message or an email, being surrounded by positive energy is really why this whole trip was a success."

After finally climbing off the saddle in the US capital, Bowen was rewarded with one of the highly sought-after tickets to the inauguration ceremony.

Handing him the ticket Congressman Earl Blumenauer, co-chair of the Congressional Bike Caucus, said the trip was "an example of what anybody can do to make the country better. It's people burning calories instead of burning fossil fuels."
Posted by Recovox at 9:11 AM