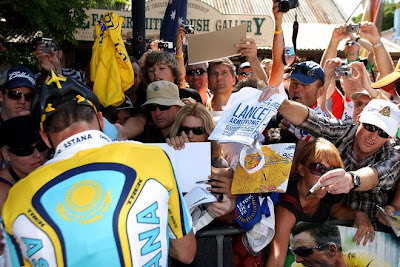 Armstrong began his comeback at this week's Tour Down Under in Adelaide, Australia. (Ezra Shaw/Getty Images)
Lance Armstrong said on Wednesday that he doubted if his results from independent anti-doping tests would be given a fair hearing.

However, the American said he would push ahead and publish data through independent anti-doping expert Don Catlin that proves he’s racing clean at this week’s Tour Down Under, where he's begun his comeback after a three-and-a-half year hiatus.

Armstrong said on Wednesday that he would depend fully on Catlin to decide which information would be made available.

"I would rely a lot on what Don Catlin wants to publish, but we will definitely be publishing data and information," Armstrong added.

He added that he had fears some of the data could be misunderstood because of its complexity.

Armstrong said he’s concerned that his haematocrit (red blood cell count) level – a biological parameter than can indicate, but not necessarily prove, blood doping – could be misinterpreted.

The use of banned blood products that enhance performance usually raises the haematocrit level towards that permitted threshold, prompting suspicion of cheating.

However, haematocrit levels are also known to fluctuate naturally.

"Not everyone in this room is going to say that that means I must have cheated. But a few of you would say it was suspicious."

Armstrong, who revealed he could continue his comeback for a full two years, said he has been tested a total of 13 times since August, with tests being carried out by his Astana team and the various anti-doping bodies.

After initially saying he would only ride for one year, Armstrong said he could consider going on for two years -- but no further.