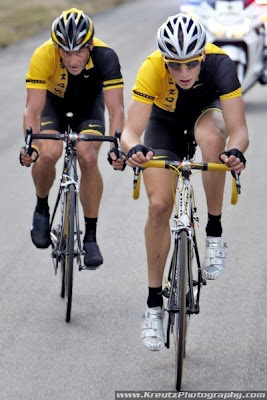 Since the hustle and bustle surrounding the announcement of a new US-based developmental squad supported by Lance Armstrong and captained by Taylor Phinney, not a lot of additional information has surfaced. What was revealed was that the team would be sponsored by Armstrong's charity, Livestrong, and by Trek bicycles, with the director sportif position going to former Armstrong teammate Axel Merckx. So we went to the man who will be in charge on the ground for an update.

Merckx said that the start-up process is going a little slow, but that is to be expected building from nothing. "Things are coming along," Merckx told Cyclingnews from his home in Canada. "It's a brand new team so everything has to be set-up. But we have a lot of great sponsor support and the roster is finished now.

"I have a great support with the management group so it has been really smooth with me." Merckx is working closely with Armstrong's long-time friend Bart Knaggs is a partner in the company that formed out of the management of the US Postal and Discovery Channel teams, Capital Sports & Entertainment.

Merckx said that he has had the pick of the litter in finalizing the roster. "There has been a lot of rider interest which has been great. It was hard, you have to make decisions and it's too bad we can't hire everybody. We will release the names pretty soon, and then do a press conference in February at training camp." Former US Junior National Road Champion Ben King is one rider already signed by the squad.

As for the racing plans for the first year, Merckx is taking a very teacher-student approach to the team. "We will do a stage race a month and some training camps over the year. I want to teach them to be ready to become great riders and help them adapt and make the step-up to that level. The riders can also choose to do some local racing as well. But training is a major part of racing. It used to be all about racing, but there is much more to it than that."

The team is going to do the majority of its racing in North America, hitting the major stage races on the NRC calendar as well as some UCI races, but will also be making some ventures onto European soil to get a well-rounded racing education. "We are starting with the Vuelta Mexico Telmex, and will race Redlands, Nature Valley, Gila and such. I didn't think it was good for young riders to be thrown at the Tour of California, especially in the first year. A lot of big teams with great riders, so we will start smaller."

But the team could be racing with the big boys by the end of the year, with Merckx looking at the Tour of Missouri as a nice capstone on the season. "That would be great, we can definitely be ready by September I think, and it would be great preparation for riders going to Worlds. As well it will be great to see how the riders progressed throughout the year, to measure the evolution."
Posted by Recovox at 10:54 AM