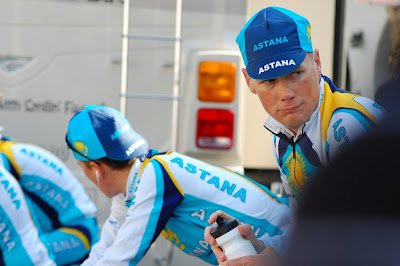 Most cyclists in Spain are legally required to wear helmets, so when a Spanish policeman saw a group out for a ride and one rider not wearing a helmet, he pulled that rider over. Fortunately, Team Astana's Chris Horner knew that professional riders are not covered by the law.

Astana is holding its training camp on Tenerife, in the Canary Islands, and a group of riders including Horner and Lance Armstrong went out for a ride, when the group was stopped by the Spanish police.

"Horner found it funny because he knew the rules – he lived for some time in Spain – and knew there is an exception for professional riders," Astana spokesman Philippe Maertens told Cyclingnews. "He had to explain the rules to the policeman." After showing his identification to prove that he was, indeed, a pro rider, he was able to go on his way.

The 37-year-old actually had his rider's license with him as proof. "He always has it with him as he knows the Spanish rules," Maertens said. "Probably he was the only one who had it with him."

The Spanish law requiring helmets took effect in January of 2004. The exceptions are: when riding in cities or towns, during "periods of extreme heat", when riding up steep hills, for medical reasons and professional cyclists. Any riders during a competition are not required to wear a helmet, either. Violators are subject to a fine of up to 90 euro.
Posted by Recovox at 8:59 AM