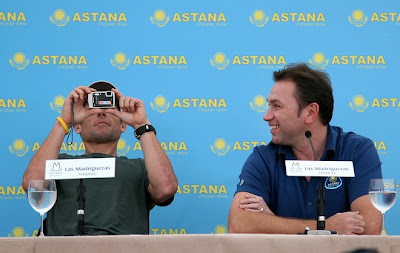 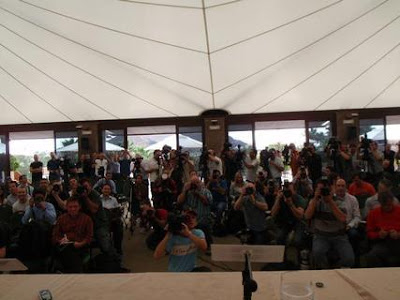 The view from the receiving end - Photo by Lance Armstrong

A room full of journalists literally from around the world gathered to pepper Lance Armstrong with questions ranging from where he would spend Christmas to what he thought his chances really were to win an unprecedented 8th Tour de France.

Lance was first asked – actually a bit challenged – if he could be believed that he would in fact ride for another teammate at the Tour de France. He replied that he wasn’t unrealistic or unfair and that he didn’t know if he was in the same physical condition as in 2005, but that questions about his physical condition were certainly logical. He came to the team with no demand to be the leader – that would not be fair, either to the team or to Joahn Bruyneel (his director). Lance noted that there’s an unwritten “law” in professional cycling that a team supports the strongest rider and that he would follow that law to the fullest. He said at the end of the day he might be the 2nd, or even 3rd strongest rider and that he respects Johan and his orders. Without question he would have no problem supporting riders like Alberto Contador, Levi Leipheimer, and Andreas Klöden.

In terms of bringing educational and financial assistance in the cancer fight to places around the world, Lance said that the LAF is already in negotiation with over 20 countries as they prepare for the Global Cancer Summit. Cancer is a complicated issue and requires action by both governments as well as their people, especially in terms of lifestyle and habits. Governments also have to take interest in Public Health issues, treating them as an investment and not just an expense. A reporter from Ireland asked if Lance intended to come to his country, and Lance said that racing at the Tour of Ireland in August was a possibility, in fact he last raced there in 1992! He commended Ireland for their smoking ban, noting its importance to public health, but that in places like Mexico and Asia that issue is a very difficult battle indeed.

And what about the recent elections in America, and his own chances for political office? Lance said that in any political race he doesn’t take a position, as he represents, “…a disease that affects both sides. If I take a side I have alienated half of the population. I voted as a voter should, and while I won’t tell how, I’m excited about President Obama. He has a good staff, is committed to healthcare, and has a personal connection to the cancer cause.” As for running for office, “…never say never” was his reaction. Lance said that while 2010 was not very realistic, he also needed the motivation, too. He said you have to want to be effective – you can’t do it for ego or on a dare – and that you have to believe you can do it better than the other person, and be truly passionate about it.

While the global aspect is taken from a very positive aspect, one country in particular always comes up – France. Does he think that will be a problem? Lance said France is not a “problem”, it’s a relationship, and like all relationships sometimes it’s good and sometimes it’s bad. He said, “If you believed everything you read in the press, I’d stay away.” But then he noted that when he was in Nice the week prior, when he left a restaurant after dinner the entire group of diners stood up and applauded and cheered him on for Tour #8. “France is not a country of haters, but there will always be detractors. But that won’t stop me, or my team, or the Lance Armstrong Foundation, or Alberto Contador.” He laughed and did ask that when he comes they please don’t block the roads, but then noted that the week prior to camp he could have spent it anywhere in Europe he wanted, but he chose Nice, and that at the end of the day he hoped to get to a point of mutual understanding.

While the Tour de France is certainly the zenith of the sport, this edition will be special. It will pass through Girona, Spain where Lance lived for four years, and starts in Monaco, just east of Nice, his home for five years. Lance commended the people of Spain for their support of the sport of cycling, and noted that Barcelona was a “true gem of Europe.” How strong is Lance, compared to the rest of Team Astana? Johan Bruyneel said he was in the Top 3. Lance paused and said, “I feel OK – for an old guy!” But then the more he thought about it, he smiled and said to Johan, “I’m better than Top 3! Maybe we should have a race?” – Johan just shook his head, smiled back, and said, “You’re Top 3…”
Posted by Recovox at 6:06 PM