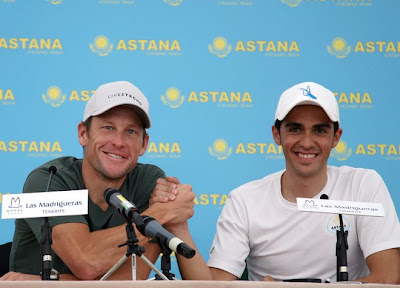 Lance Armstrong played down any rumours of internal strife in his new cycling team Astana, during a press conference on the Canary Island of Tenerife Thursday afternoon.

On his comeback from retirement, Armstrong joined the Astana team of Spaniard Alberto Contador, who recently became the fifth cyclist in history to secure victories in all three major Tours winning the 2007 Tour de France and the Giro d'Italia and Tour of Spain in 2008.

Despite rumours of internal competition and strife - it was recently reported that Contador was unhappy at his possible status being upset - the American was keen to show, at least, that Astana is one big happy family.

The 37-year-old suggested he would be happy to race as the team's second or third-in command if circumstances demanded it.

"I've been around longer been racing professionally since 1992, when Alberto was, what, ten," Armstrong said in a teleconference from Tenerife in Spain where he is training with Astana. "I think Alberto has obviously a tremendous amount of natural talent, and can read a race.

"I came into this completely open, loyal to Alberto, the team and the unwritten laws of cycling," he added. "I have a lot of respect for this man. I can't say it any simpler. This guy is the best cyclist in the world. I came here (Astana) as a volunteer. I'm racing and training every day for free. If my global initiative is successful and I finish second, eighth or ninth on the Tour, then that's fine by me."

Armstrong also hit back at allegations of doping, which appeared to reach a high after his seventh consecutive victory in 2005 when a newspaper report said urine samples attributed to him from the 1999 Tour had tested positive, retroactively, for the banned blood booster EPO.

An International Cycling Union (UCI) hearing headed by a Dutch lawyer later cleared the American of any wrong-doing.

"I've heard every conspiracy theory known to man," said Armstrong. "I maintain I've never doped in my life. I fully co-operated with the (UCI) investigation which cleared me. There's not much else I can do."

Armstrong also praised his ex-wife for backing his comeback.

"In 2005 I was tired mentally and ready to stop," he said. "I didn't imagine I'd come back. I have three young children and this job takes me away from home - myself, my ex-wife and my three kids. If she would have said no I wouldn't have done it. Thank God for her and that decision and that support. I'll spend most of my time in the US.

"I've been training in gym twice a week, now I'm almost 100 percent on the bike, continue to do core work but everything with the gym is basically done and now it's 100 percent cycling," he added.
Posted by Recovox at 11:46 AM