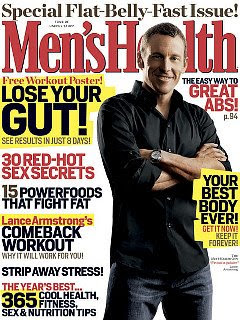 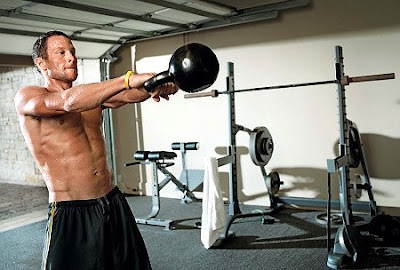 Bicycling legend Lance Armstrong during workout in his home gym as he prepares to resume career.

The buff cycling superstar is offering fans a sneak peek at his training regimen in the new issue of Men's Health magazine as he prepares for a dramatic comeback in next year's Tour de France. Armstrong, 37, who retired from cycling under a cloud three years ago, says working out has gone totally high-tech since he first started pounding the pedals.

“Back in the day, people trained on just their feelings,” Armstrong, who plans to compete in an Australian race next month, told the magazine. “Now you have heart rate, altitude, lactic acid all measured on one unit.”

Armstrong, a cancer survivor, has won the tour a record seven times. He retired in 2005 after being accused of evading anti-doping rules. The cycling legend said his workout results made him certain that he would finish on top.
“I knew I was ready to win the tour,” he said. “If I stepped on the scale in the morning and it said a certain weight and the power output was where it was supposed to be when I tested at the end of the day, it was over. Nobody close.”

Armstrong plans to compete on the team of longtime colleague Johan Bruyneel, even though he might not be the clear-cut favorite on his powerful squad. “I'm so loyal to Johan, there's no way I'd cross him or race against him,” Armstrong said.

He has pledged to be open with the media, a big change for an athlete who went to extraordinary lengths to protect his image, including snooping on journalists.

Armstrong also vowed to submit to a program of rigorous blood testing to try to disprove stubborn but unproven allegations he has used performance-enhancing drugs.
Posted by Recovox at 7:33 PM