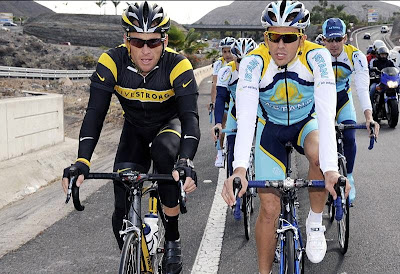 Team Astana completed its last full day of training camp on the Spanish island of Tenerife with a ride up the Teide volcano. Saturday, Lance Armstrong led a group up the climb that tops out at 2325 meters. Triple Grand Tour winner Alberto Contador, still recovering from operation on his nose, celebrated his 26th birthday with a shorter ride and plans for a season debut at the Giro di Sicilia.

Armstrong, seven-time winner of the Tour de France, climbed to the cable car station which takes visitors to the top of Spain's highest mountain, 3718 meters. His group of seven -- including Levi Leipheimer, Yaroslav Popovych and Jesús Hernández -- rode over four hours, according to La Gazzetta dello Sport. Hernández, one of Contador's main training partners, attacked the group near the summit.

Contador chose a lighter training ride of around three hours. The training camp is his first time on the bike since the end of his season which was marked by non-serious crash in Madrid's ACP Criterium and a planned deviated septum operation last week.

The Spaniard is considering staring his 2009 season with the Giro di Sicilia, January 30 to February 1, with the cancellation of the Vuelta a Valenciana, February 24 to 28, possible. His schedule will begin slower than Armstrong's as his main objective is in July, a repeat of his 2007 win in the Tour de France. Confirmed race dates include the Paris-Nice, March 8 to 15, and the Dauphine Libéré, June 7 to 14. The duo will not race together until the Tour de France.

The camp ended Sunday, one week after it convened. It was highlighted by the team's press conference with Armstrong. He travels to the USA to participate in a cancer related meeting in Atlanta, Georgia. Contador joins Leipheimer, Popovych, Andreas Klöden and Team Manager Johan Bruyneel to visit the team's sponsors in Astana, Kazakhstan. Contador and Armstrong will meet again with the rest of their teammates at a camp in Santa Rosa, California, February 1 to 10.
Posted by Recovox at 7:34 PM