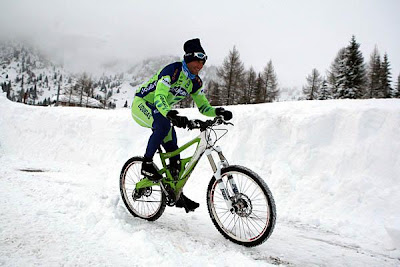 Ivan Basso took to the snow of Passo San Pellegrino while his 2009 Giro d'Italia rival, Lance Armstrong, was on a surfing adventure with his Astana teammates. The Italian from Varese is with his Liquigas teammates in northern Italy for a five-day training camp that ends December 5.

"This year it is fine like this. Maybe next year Liquigas will go to the ocean, who knows," said Basso in reference to Armstrong surfing the Spanish waves.

His former Tour de France rival is with his team on the Spanish island of Tenerife for the first of its training camps in preparation for the new year. Team Liquigas decided to host its first camp within the borders of its home country. It is a two part camp, the first in Bibione and the second on San Pellegrino, near the climb Basso covered on the way to his 2006 Giro d'Italia victory. 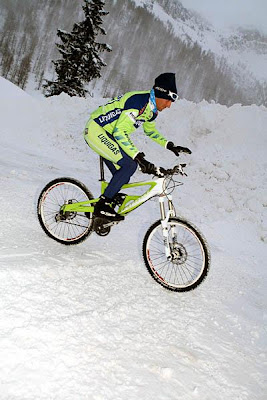 "In this period of November and December it is right to do these types of things. For example, today [December 2] I was on the snow riding a specially equipped mountain bike. It was beautiful and we had fun. We also had a 10-kilometre hike in the mountains -- the day passed nicely."

Last weekend was the first time for Basso to meet all of his future teammates. The team spent Saturday and Sunday in Tuscany's seaside town of Bibione to bond and go over the 2009 programme.

"Immediately were able to find a harmony amongst us and it was very relaxed. It started with the sensation of like having tail wind."

Basso and Armstrong will face each other in the 2009 Giro d'Italia, May 9 through May 31. It will be their head-to-head in a Grand Tour since the 2005 Tour de France.
Posted by Recovox at 5:15 PM