America's Competitive Cycling On The Rise 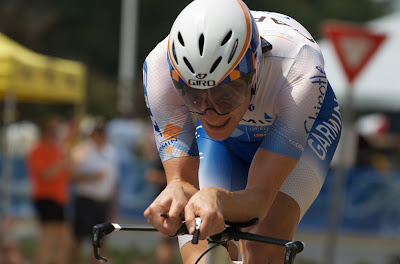 The sport of competitive cycling in the United States continues to grow according to the latest figures released today by USA Cycling.

For the sixth consecutive year, the number of licensed competitive cyclists has risen compared to the previous year, while the number of registered clubs and event sanctions also increased. Collectively, these categories represent the popularity of bike racing in America from a participation standpoint.

At the close of the 2008 license sales season on November 30, USA Cycling listed 63,280 licensees, a 2.9 percent increase over last year. In similar fashion, the number of sanctioned clubs rose 1.8 percent as USA Cycling listed 2,155 teams among its constituents. USA Cycling also sanctioned 2,551 events, a 3.1 percent jump from a year ago.

The growth in membership continues a six-year trend which has seen the number of licensed racers in America increase by 48 percent since 2002. Over that same period of time, the number of events sanctioned by USA Cycling has risen by 50 percent, while affiliated clubs have grown by 30 percent.

Many of the sport’s insiders point to the success and popularity of American athletes in cycling’s most notable events, such as the Tour de France and the Olympic Games, as a primary factor in the sport’s recent boom. The most significant growth occurred throughout Lance Armstrong’s dominant seven-year winning streak at the Tour de France between 1999 and 2005, while success by several other Americans on the sport’s biggest stage since then has encouraged continued interest.

If history is any indication, cycling is poised for similar growth in 2009 following a five-medal performance in Beijing – the most successful ever for a U.S. Cycling Team at a non-boycotted Olympic Games – as well as a return to competitive cycling and the Tour de France by Armstrong. Factor in the 13 major internationally-sanctioned professional men’s and women’s races set to take place in the US next year, as well as Armstrong’s commitment to race in February’s Tour of California, and the popularity of the sport on US soil next season is sure to reach new heights.

“Once again, we’re excited to witness continued growth in the sport of cycling,” said Steve Johnson, CEO of USA Cycling. “The market for amateur sport in the United States is a competitive one with so many choices and opportunities available to athletes these days. That said, to experience another year of increased participation is very rewarding. Looking ahead, with the continued expansion of professional cycling opportunities both domestically and abroad, we hope and expect this growth trend to continue throughout 2009 and beyond.”

Broken down by specific disciplines and types of licenses, road, track and cyclo-cross grew by 3.2 percent, while mountain bike increased 1.2 percent. The number of professional riders in the U.S. rose 6.3 percent and the amount of student-athletes competing for collegiate clubs jumped 2.5 percent. Of all of its licensees, USA Cycling’s largest increase was in the number of licensed bike race officials, a figure that rose 17.6 percent.
Posted by Recovox at 6:39 PM