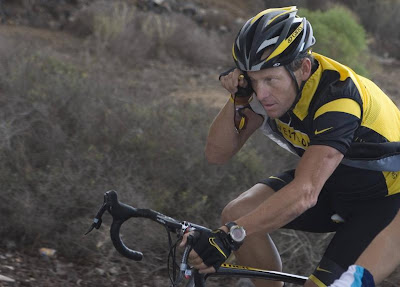 Lance Armstrong during a training session with the Astana team in San Isidro, Canary Island of Tenerife on December 1, 2008.

Un-retired pro cyclist Lance Armstrong will be primarily seeking to raise the profile of his Livestrong foundation when he returns to race the 2009 Tour de France, organisers said on Tuesday.

Armstrong announced Monday that he would race the Tour, having originally implied his focus would be on a maiden Giro d'Italia instead.

In returning to the Tour, which after having beaten testicular cancer in late 1996 he won seven times in a row between 1999 and 2005, Armstrong will compete in the same team as 2007 Tour de France champion Alberto Contador, who also pulled a Grand Tour triple by winning the 2008 Giro and 2008 Tour of Spain.

Tour organisers confirmed Tuesday they had had talks with the American regarding his return to the race.

"We recently had the opportunity to talk with him," Tour director Christian Prudhomme told AFP, adding that they had met at a Paris airport along with Jean-Etienne Amaury and Yann Le Moenner, leading figures in Amaury Sport Organisation (ASO), which runs the event.

"He told us of his wish to compete in the Tour and that if he did come back it would be above all for the sake of his foundation, " Prudhomme said.

Armstrong has previously alluded to security concerns regarding the race but Prudhomme said he had not made any particular request in that vein regarding next summer.

"Cycling in general, and the Tour de France in particular, are incontestably close (to the public). Of course this accessibility has to remain. For us, the aspect of a popular fete comprises an integral part of the Tour," Prudhomme stressed.

Armstrong, 37, is set to make his professional comeback in next month's Tour Down Under in Australia. Astana is currently having its first 2009 team camp on the Spanish island Tenerife. Contador and Armstrong will train together for the first time on Thursday, their Astana team said.

On Tuesday, they each trained in separate groups in the session that began on Sunday.

"We have groups each day, one with the best prepared cyclists and the other with the least prepared," an Astana spokesman said. The two are to train together "in theory on Thursday" in the same group. 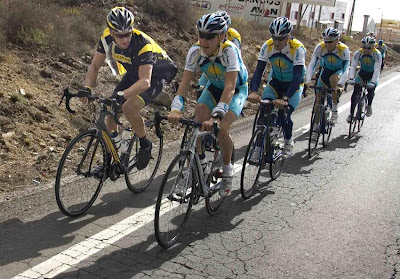