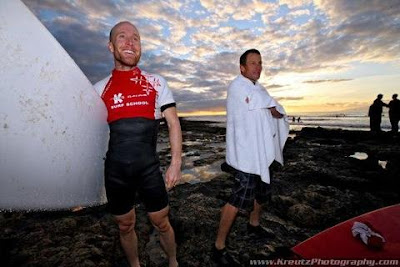 Picture blue skies, calm ocean waves lapping in, white sand beaches….and crazy professional cyclists taking surf lessons on Day Two of Camp Tenerife! After breakfast and a 2-3 hour training ride it was time for rest, lunch and then Surf’s Up! The majority of the riders and staff loaded into vehicles and drove five minutes to the beach to meet up with the instructors of the K16 Surf School. A few were not on board, so to speak: Alberto is still recovering from his surgery and was kept company by Jesus, Sergio, Dani and Chris Horner (who is still adjusting to the time difference from the U.S.) After a 20 minute lesson on the beach that demonstrated the correct paddling technique and the proper way to get your feet under you as the wave catches the board, Surf Team Astana was ready for wave action! 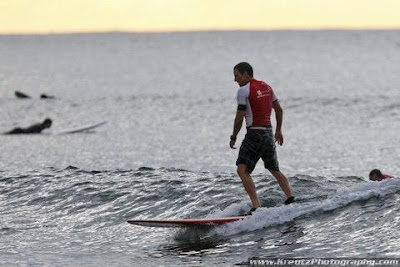 The sets were near-perfect for beginners and challenging enough for those with some surfing experience, too. While a few guys had surfed before it was the first time for most and many of the guys grabbed wave after wave during the lesson. Reports have it that Tomas showed great form on the board, with other notable rides belonging to Popo, Lance and Andreas. Unfortunately Steve suffered a shoulder separation and was aided back to shore by Sean where chiropractor Gianluca popped it back in good as new, but ending Steve’s session for the day. 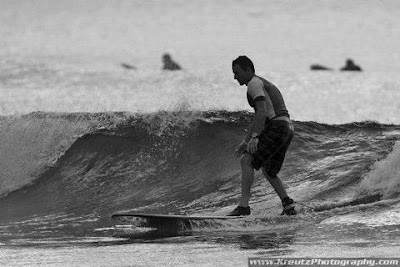 Also enjoying the surfing experience were some of the Team Astana staff as DS’s Sean and Eki plus soigneurs Alejandro and Vincent spent some time in the lineup while the rest of the staff enjoyed the show from the comfort of their beach chairs on the sand. Most of the guys tried to pressure Johan into giving it a try, but the Boss was sand-side for this one. It was a great way to let the guys have some fun and develop new friendships in the early season as they prepare to dominate the cycling scene in 2009. Watch for sore muscles not regularly used in bike handling to show up on Tuesday! But with most of the guys not anxious for their surf session to end the overwhelming consensus is that the sore muscles will be a small price to pay for waves of fun. And of course really big news came today with Lance announcing that he will, indeed, be riding the 2009 Tour de France. 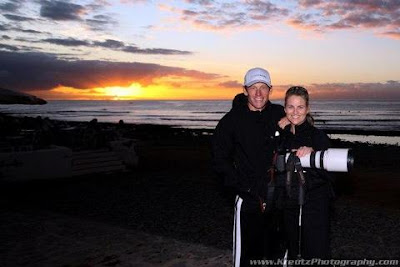 Elizabeth Kreutz and Lance. Employee # 2 at the LAF and an amazing photographer.
Posted by Recovox at 4:19 PM