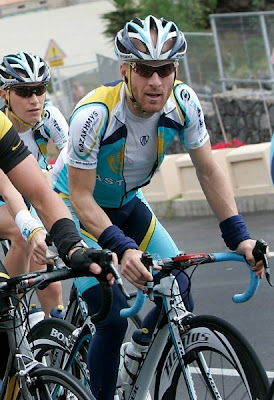 By: Gerard Cromwell
Levi Leipheimer says his prototype Bontrager wheelset (on his bike here) and Lance Armstrong are each going pretty well.

In addition to taking surfing lessons, attending team meetings and logging some miles, the Astana team has been busy testing new equipment during this week’s training camp in Tenerife.

One of the many items under test was a spanking new set of as-yet-unnamed Bontrager wheels that Lance Armstrong has called “insanely fast.” According to Trek spokesman Ben Coates, the wheels are a prototype, and the only pair around at the moment. 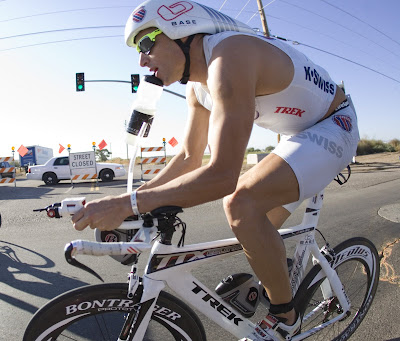 photo: Jay Prasuhn
“Since then, wheels have gone deeper and deeper, and Johan (Bruyneel) had spoken about them a little bit here and there and Lance wanted to try a pair as well. So, we worked with Steve Hed, had a deeper-section wheel made up and the first pair the team has ever used are the wheels they have been riding this week.

“So far, there is a ton of excitement around them. They are just crazy fast. The aerodynamic advantage is so good that the bulge on the aero section of the wheels is quite a bit bigger and it’s longer and it will hold the wind better. They should be a very fast weapon for the team to use on flat roads, or mildly rolling stages, or of course in a time trial. ”

The blustery conditions of Tenerife have proven a tough testing ground. After an undulating two and a half hour training spin on the third day of camp, Levi Leipheimer said they were fast, but strictly for calm weather.

“I almost ended up in the bushes,” he said, laughing. “The first day was fine, but I used them yesterday in the crosswinds and it took everything I had to stay on the road. Thomas (Vaitkus) had them today. I haven’t spoken to him yet, but they are fast.”

Armstrong’s presence on the team has also given Leipheimer a boost.

“It’s nice to have Lance here. I mean, he’s an example for everyone. He’s probably everyone’s hero here in the camp. You know, he motivates everyone, definitely. There’s a lot more attention on the team, so that’s good. There’s more chaos.”

And Armstrong’s strength after the long layoff has proven something of a surprise.

You know, it’s December and it doesn’t really matter, but Lance is definitely going well,” said Leipheimer. “He’s probably in the best shape for December that he’s ever been in. He says that. I mean, I haven’t been with him every December, but I’m pretty surprised at how strong he is.”

With all the focus on Alberto Contador and Armstrong for next year’s Tour, Leipheimer could very well be in a position similar to that of Carlos Sastre this year, when his main competitors found themselves in a Catch-22 situation with the Schleck brothers on L’Alpe d’Huez.

“Who knows what will happen?” says Leipheimer. “We’re gonna have to carry the race a lot, because everyone is looking at us now. We have such a strong team on paper that they’ll look to us to do all the work. You’re right, we have Lance, Alberto, (Andreas) Klöden, myself, Haimar Zubeldia, (Yaroslav) Popovych. These are guys who have all been top five in grand tours, so it means the other teams will have to watch out for sure.”

Can Armstrong really win eight Tours? “Yeah!” said Leipheimer. “It’s definitely possible. He won seven, so why not?”
Posted by Recovox at 8:58 AM