Armstrong: Contador Is The Best 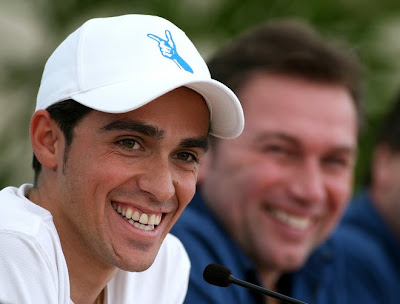 It's undisputable that the second return of Lance Armstrong has attracted the imagination of both media and fans world wide. No aspect of the story so far has been examined closer than the supposed rivalry between the revered veteran and his teammate Alberto Contador. The former is a seven-time Tour de France winner while the Spaniard a three-time Grand Tour champion over the course of the past two seasons.

And while there has been speculation over the role of each rider in the team, both riders yesterday appeared in public together for the first time. A press conference in the hotel Las Madrigueras on the island of Tenerife, where the Astana team is having its camp, was the setting for the 'unveiling' of the team's dynamic duo.

When Lance Armstrong announced his comeback, he made it clear he would try for an eighth Tour title, but then backed down to a point where it wasn't clear if he would actually race the July event. He emphatically stated his intentions to compete in the Tour earlier this week, qualifying the announcement by saying that he was committed to racing "for the strongest guy".

Today, Armstrong dispelled any notion of there being internal strife within the team by unequivocally supporting his young Spanish teammate, Alberto Contador. "I think Alberto has obviously a tremendous amount of natural talent, and can read a race," Armstrong said. "I have a lot of respect for this man. I can't say it any simpler. This guy is the best cyclist in the world."

"There are certain unwritten laws in cycling; the others ride to support the strongest rider. Whether it means supporting Alberto [Contador] or Levi [Leipheimer] or Andreas [Klöden], I'll do that."

Armstrong explained that the reason he and Contador rode in separate groups in training was not because of animosity, but for logistical reasons. "It is better to keep an open attitude, we are in different phases in our training. One guy was in hospital last week [Contador had surgery on his nose], I am racing in a month, it is totally logical that we don't train together. That shouldn't lead to any conclusions or polemics."

Johan Bruyneel, the Astana team manager and long-time collaborator with Armstrong, agreed with the American's assessment. "If Lance is not the best, he will become the best teammate Alberto could ever have dreamed of," he said.

The return of Armstrong was a shock for Contador, and led him to think about changing teams. But the Spaniard, who turns 26 on Saturday, told Reuters that he has changed his point of view since then. "You analyse the situation and once the shock has passed you see the different possibilities Astana is offering you," he said. Aside from the fact that Bruyneel gave Contador no option to get out of his two-year contract, Contador has come to accept his situation.

"The Astana people have faith in me. Today I'm sure I'm starting the season having made the correct decision."
Posted by Recovox at 8:43 PM