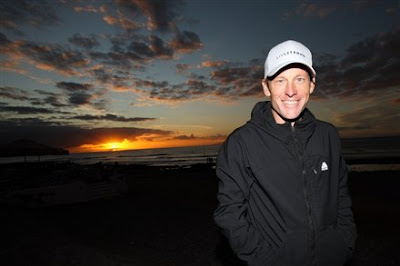 Team Astana's Lance Armstrong and Alberto Contador are on separate paths towards the 2009 Tour de France, starting with the team's training camp on the Spanish island of Tenerife. The duo, both Tour de France winners, rode in separate groups during yesterday's training ride.

"It was hard training. Here, there are long and demanding climbs. With [Levi] Leipheimer and [Jesús] Hernández I was often going all out," said Armstrong to La Gazzetta dello Sport.

The seven-time Tour champion, returning from retirement, completed four hours of riding yesterday that took in the 12-kilometre climb of Erjos. His group contained other top riders, including Andreas Klöden, and was followed by Team Manager Johan Bruyneel and Directeur Sportif Dirk Demol. Alberto Contador, winner of all three Grand Tours, rode two and a half hours with a separate group guided by Directeur Sportif Alain Gallopin. It was his first training ride since an operation last week on his nose.

Both riders have July's Tour de France on their mind. Armstrong will ride the Giro d'Italia for the first time in May and Contador, winner of this year's Giro, will follow a separate programme to focus on repeating his 2007 Tour victory.

"It is not a complicated relationship. At Astana we are professionals and we will race for the strongest," said Armstrong. "In 2008, he was the best in the world, while it is not said that I will be the same as 2004 and 2005 [He retired after winning the 2005 Tour - ed.]. Therefore, if Alberto is still the strongest I will support him."

Armstrong's words surprised Contador, who was uncomfortable talking about the team for the Tour." Yeah, he said that? It is good that there is this attitude in the team. Armstrong is a person like everyone else, with him I have the same relationship that I have with any other teammate."

Tomorrow is the official team presentation of the 2009 team. Tour Director Christian Prudhomme will be part of the guests in attendance and it will be the second encounter recently for the two. They met last week while Armstrong stopped at Paris' Charles de Gaulle airport.
Posted by Recovox at 9:01 AM