Welch back in the paddle, uh, saddle again 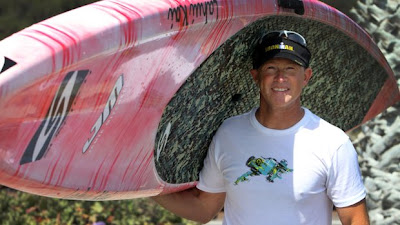 Even before Greg Welch was forced to retire in 1999 as the world’s top-ranked triathlete, the ‘94 Ironman champion could easily envision paddles in his future. Unfortunately, they were the kind of paddles attached to a defibrillator, delivering body-jarring jolts of electricity to re-start his heart.

After 12 years and 10 heart surgeries lasting a total of more than 60 hours, Welch indeed has found the power of the paddle, but it’s a paddle of a different sort. He’ll be using it to navigate the treacherous 32-mile channel in Hawaii called Kai’iwi, a wind-whipped and shark-infested span of ocean that’s locale of the Molokai 2 Oahu Paddleboard World Championships on Sunday.

“I do have trepidation,” said Welch, 46, his native Australian accent still intact after 21 years of residence in the triathlon hotbed that is north San Diego County. “I’ve gotten over the fear of my heart problem. I couldn‘t care less about my performance. I’ll just be out there for the challenge of trying to get from Point A to Point B. And I know my limits.”

Should he forget or ignore those limits, surely, Welch will have sufficient reminder with him on his 14-foot board. For one thing, there’s that high-tech gadget just beneath the skin on the left side of his chest, an implanted defibrillator. It monitors and responds to accelerated heartbeats that result from the ventricular-tachycardia condition that drove Welch to retirement..

Perhaps more importantly, Welch will be in the standup-paddleboard (SUP) three-man team event with Encinitas buddies Roch Frey and Chuck Glynn in a relay format. Frey, who recently combined with Welch and Paul Huddle to finish the 40-mile event to Catalina, is 43 years old and coming off both hip-replacement and knee surgery. Glynn is 25.

“Chuck’s the young buck, one of the best paddleboarders around,” said Welch, “and he’s got two old cronies who are washed up and almost dead.”

If only Welch was completely joking. Nothing less than the prospect of death would be able to make a veteran triathlete – let alone the winner of five world championships, including the rare “Grand Slam” -- walk away from the world’s most grueling sport.

Consider that in ‘99, Welch was the early gold-medal favorite for the debut of triathlon in the Sumemr Olympics, which happened to be located on the Sydney Harbor course where Welch grew up racing. He was already qualified for Team Australia and ranked No. 1 in the world.

During the ’99 Ironman, however, Welch began having what he thought were asthma attacks in the first--phase swim. He stopped thrice in the water to let his breathing calm down. It happened 12-14 more times during the bicycle phase and a few more times in the running marathon, prompting Welch to pull off the road to regain his breathing. Somehow, he still finished 11th.

“I was so mad because I was one place out of the money,” said Welch. “But I could’ve killed myself. I basically had 18 cardiac arrests. But it was the Ironman. There is no (pain) threshold.”

Diagnosed with ventricular tachycardia, Welch was taking a treadmill test in Los Angeles a few months later and went into full “v-tach,” his heart rate racing to 320 beats per minute. Fitted with the internal defibrillator, he’d run, pedaled and swum his last race.

Even when doing nothing at all athletically, though, Welch’s heart issue worsened. Thirty times in 2003, the defibrillator could not control his heart rhythms systematically and zapped him with 800 volts of electricity as the last measure.

“I’d know it was coming and I was like ehhhhh, waiting for it,” Welch said. “It’s horrible, really horrible, and left me a basket case for about a year.”

As the v-tachs subsided over an 18-month period, though, Welch couldn’t stand the sedentary life and its own side-effects. Naturally drawn back to the water and the sport of his youth, he returned to surfing, but soon found that the pressure from lying on the board set off the defibrillator.

“Now I can’t even surf?” Welch said. “I was devastated. I tried golf, but couldn’t even walk a difficult course without feeling it. And then I tried paddleboarding, and once I got out there, I realized it didn’t raise my heart rate too much. I was a new-found athlete.”